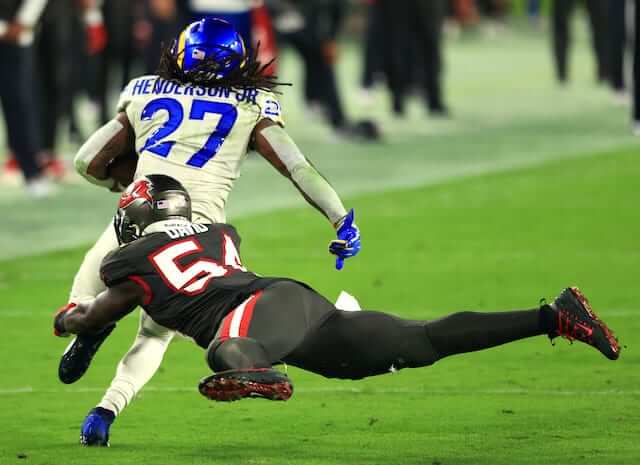 The Los Angeles Rams came up short in their quest for a Super Bowl after they were defeated by the Green Bay Packers in the NFC divisional round.

Just a week later, they watched as the Tampa Bay Buccaneers secured their Super Bowl bid with a victory over the Packers in the NFC Conference Championship Game and eventually went on to handily beat the Kansas City Chiefs. It is safe to say that having to watch where his team had failed was a tough pill to swallow for head coach Sean McVay.

Interestingly enough, L.A. had secured an impressive 27-24 victory over Tampa Bay on the road in Week 11. However, their respective performances led to the tables turning down the stretch.

McVay credited the Buccaneers for clicking on all cylinders at the right time as well as the adjustments they made versus the Packers, via Stu Jackson of the team’s official website:

“They found a way to stay together, really find their identity at the right moments and then they played their best when their best was required,” McVay said, when asked what he learned from watching the Bucs’ Super Bowl run after previously beating them. “You look at that sequence at the end of the half against Green Bay, just finding ways to win football games, making crunch-time plays. I thought really just from a coaching perspective, they did an outstanding job of being able to adapt and adjust their philosophy.”

McVay’s comments are indicative of how the majority of coaches feel when hindsight is offered during the offseason. Fortunately, his track record indicates that he will do all he can to avoid making the same mistakes in the future.

McVay has already acknowledged his shortcomings when it came to incorporating more explosive plays to the offense during the 2020 campaign. This will now be a point of emphasis given quarterback Matthew Stafford’s affinity for taking shots downfield when given the opportunity.

Of course, the pair will likely experience some growing pains early on as McVay gets more familiar with Stafford and how to best utilize his skill set. Regardless, there is no question that expectations are now as high as ever with the changes under center.

The Buccaneers benefitted greatly from having no shortage of weapons surrounding quarterback Tom Brady on offense. It will be interesting to see if the Rams make moves to shore up some more firepower as well.

Why all is not lost for England Test match cricket