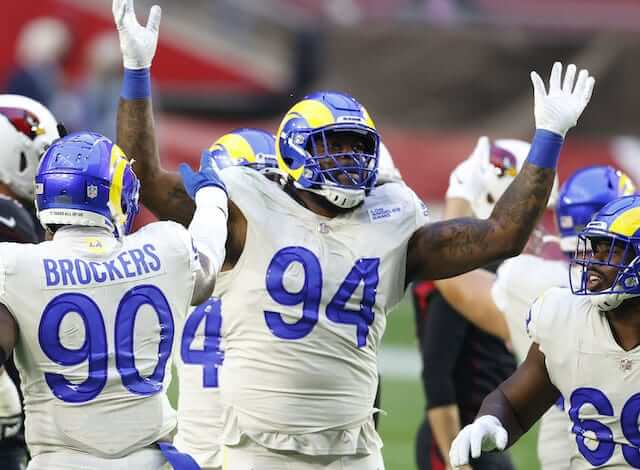 The Los Angeles Rams made headlines with their blockbuster trade for Detroit Lions quarterback Matthew Stafford to kickstart the offseason.

The Rams made quite an investment by parting ways with quarterback Jared Goff, two first-round picks and a third-rounder in exchange for Stafford. After all, Goff has one more Pro Bowl and enjoyed much more playoff success than his replacement.

Regardless, expectations are now as high as ever going into the 2021 NFL season. It appears there are even those in L.A. that feel the same.

Defensive lineman Michael Brockers was not shy about praising Stafford as a notable upgrade over Goff under center, via TMZ Sports:

Brockers added that there is good reason for the hype surrounding the Rams as potential Super Bowl contenders:

Brokers’ comments are indicative of the newfound sense of urgency to get back to a Super Bowl following a two-year hiatus. Although expectations were already high coming off their playoff loss to the Green Bay Packers in the NFC divisional round, another high-profile trade shows that the Rams are not letting up in their efforts to make it come to fruition.

It is easy to see why Brockers is feeling rather confident about the team’s chances. After all, the defense is coming off a spectacular year in which they finished the 2020 campaign as the No. 1-ranked group in the league that gave up an average of 18.5 points per game.

Their elite performance gave the offense plenty of chances to get on the board as it struggled to find a rhythm with Goff at the helm. Add a proven gunslinger like Stafford to the mix and one can only imagine what could have been this time around.

Fortunately, the Rams will not have to wait much longer to see this vision come to fruition once the Stafford deal pushes through when the new league year starts on March 17. Of course, it remains to be seen if the defense will be able to replicate their tremendous success as they look to avoid too much turnover at key positions this offseason.

Killer Kross Says WWE Was ‘Wonderful’ To Him In The Beginning

MLB Suggests New CBA Would Need To Be In Place By End Of February To Begin Regular Season On Time; Parties Plan To Meet More Frequently