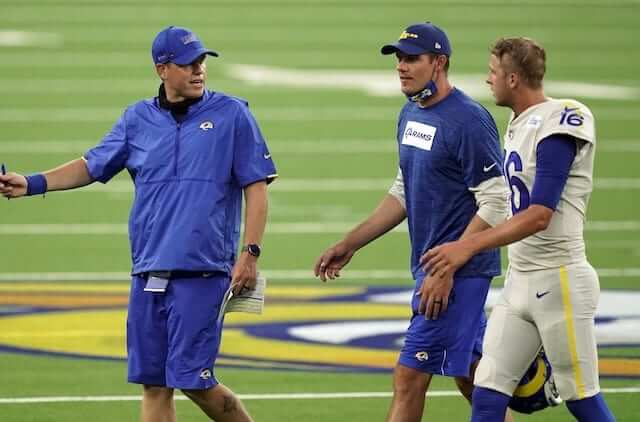 The Los Angeles Rams were one of the first teams to make a splash following the 2020 season as they traded for Matthew Stafford in a blockbuster deal with the Detroit Lions.

It was a surprising move given the Rams managed to beat the Seattle Seahawks in the Wild Card round, but apparently, head coach Sean McVay felt the need to upgrade at quarterback. Aside from the move to Stafford, McVay also saw his coaching staff turned upside down as numerous coaches left for other opportunities.

However, one person that will be staying is offensive coordinator Kevin O’Connell. He was actually offered the same position for another team, but Los Angeles blocked the move and according to Stu Jackson of TheRams.com, McVay really wanted another chance to coach with him:

“I was really excited about the opportunity to be able to work with him in year two, continue to collaborate, learn from him,” McVay said. “He understands how valuable he is to me and to the Rams and we talked about all those things, but I think it’s a credit to the respect that he’s garnered around the league. What I would say is he’s our OC and that’s why we blocked him (laughs).”

McVay added that O’Connell will get more chances to call plays during the 2021 season:

“Yeah, those are things you always talk about,” McVay said. “I think each situation is independent. I don’t think you ever want to pigeonhole yourself into (a role). Kevin and I had a lot of great dialogue and I’m always going to listen. I’m not interested in losing a coach to go do that same role and I’m not naive to the fact that the play calling, and those things are very important and when that situation came up with Matt, we talked about that. Kevin and I have had great conversations, but I would like to think that anybody that’s been a part of this Rams’ building knows that there is an investment in us trying to help guys continue to grow and if opportunities that they have outside this building don’t exist in-house, then usually that’s when we’re going to let guys go, even if it doesn’t help the Rams and that’s kind of been the approach.”

McVay has had massive success with identifying and hiring talented assistants, so keeping O’Connell should be considered a win for the franchise. Hopefully the offense perks back up and gets back to the level fans are used to seeing in 2021.

Suryakumar Yadav is a great role model for youngsters in India: VVS Laxman

Fact or Fiction: Bengals’ LSU reunion was best of the NFL Draft