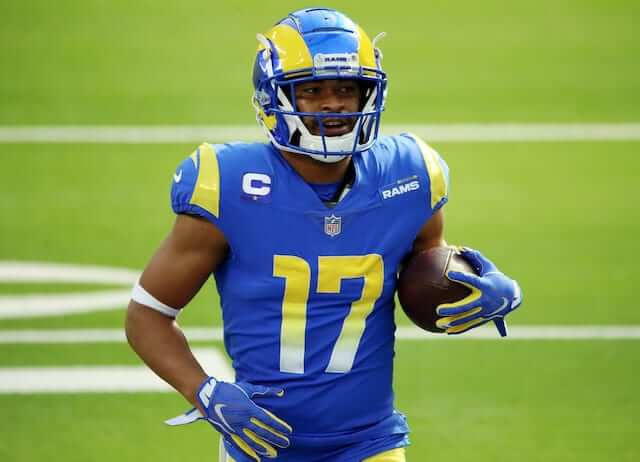 The Los Angeles Rams have made it clear that they plan on maintaining their aggressive approach when it comes to the offseason.

They pulled the trigger on a blockbuster deal for Detroit Lions quarterback Matthew Stafford in an attempt to revamp the offense. Regardless, they still find themselves around $26.26 million over the projected salary cap for the 2021 NFL season.

The Rams will need to make efforts in order to clear up some much-needed room once the new league year begins on March 17. It appears their situation has not gone unnoticed by other teams.

According to SI’s Albert Breer, teams have inquired about the availability of defensive lineman Michael Brockers and wide receiver Robert Woods:

Rams DL Michael Brockers: Still just 30, and under contract at a reasonable $9 million this year and $9 million next year, Brockers is available. Teams have also called on Robert Woods, though L.A.’s been hesitant to move him in the past when interest from contending teams has surfaced.

The Lions will be taking on an extra $10.5 million cap hit while the Rams will add their own $2.5 million hit once the Stafford trade goes through. Although the league still has yet to set a salary cap for the 2021 campaign, it is expected to be upwards of $180 million.

This leaves the Rams with the third-least cap space to work with once the offseason is in full swing. As a result, they may have some tough decisions to make on both sides of the ball.

Brockers has long played an integral role as the anchor of the defense alongside tackle Aaron Donald. He has not been shy about embracing the Super Bowl expectations that have come with Stafford’s arrival.

Of course, the same cannot be said for the receiving corps without Woods. He and Cooper Kupp have formed one of the most productive tandems in the league.

Trading Woods would free up $11.9 million in 2021 cap space. It might be a small price to pay in order to maintain the firepower on offense now that Stafford is here.

The prospect of parting ways with either one would undoubtedly deal a major blow to this star-studded roster in L.A. However, it could be necessary given the handful of players set to hit the market as unrestricted free agents.

Mikey Williams vs Marvel Allen! 5 Star 2023 Guards BATTLE IT OUT!