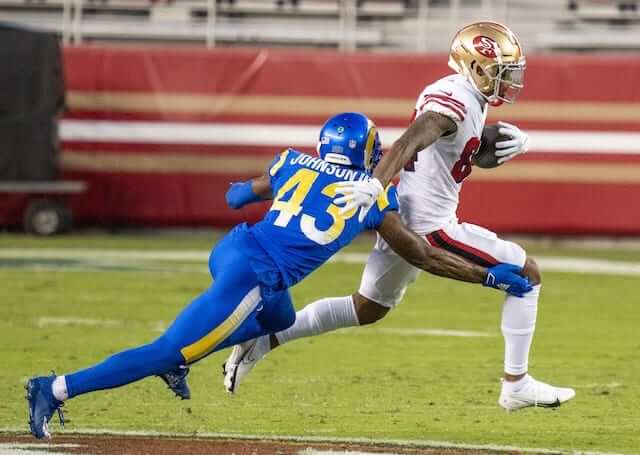 The Los Angeles Rams declined to use the franchise tag on John Johnson III and Leonard Floyd, thus letting them hit free agency.

The decision does not come as a surprise after the NFL’s salary cap fell to a $182.5 million, nearly $20 million short of 2020’s $198.2 million cap. The Rams have several expensive contracts on their books after agreeing to extensions for Jalen Ramsey, Cooper Kupp and Robert Woods prior to the 2020 season.

Johnson and Floyd are expected to have robust markets when free agency kicks off as both were integral pieces in Los Angeles’ No. 1 ranked defense under former defensive coordinator Brandon Staley. While a return to the Rams for either player is not out of the question, it will be incredibly difficult for Les Snead and the front office to match the raises both are going to command.

Johnson was drafted by the franchise 91st overall in 2017 and has blossomed into one of the more underrated safeties in the NFL. He is a sure tackler and was chosen as a captain for the Rams this past season, displaying his leadership ability both on and off the field. Johnson’s departure from L.A. seemed inevitable after they took Terrell Burgess and Jordan Fuller in the 2020 NFL Draft, so his loss is somewhat mitigated by the promising pair of defensive backs.

Floyd was the Rams’ prized free-agent signing last offseason and he had a career year under Brandon Staley. Floyd recorded 10.5 sacks and 55 combined tackles during the past season, shedding his bust label and earning a sizable contract in the process. Los Angeles may prioritize trying to bring back Floyd as they do not have many pass-rushing options on the roster.

While the Rams have their cornerstone defensive players in Aaron Donald and Ramsey, replenishing the roster and surrounding them with talent will be of the utmost importance in the coming months. It will be interesting to see how their maneuver this offseason and whether or not they can replicate their success on that side of the field once the 2021 season officially kicks off.

NBA PM: Are The 76ers Ready To Contend? | Basketball Insiders

Check Out The Benefits Of Trade Rumors Front Office

Randa Markos Not Retiring After UFC Exit: ‘On To The Next’

Horse Racing NAP of the Day for 21 August