Jessica McCaskill, Cecilia Braekhus to settle matters once and for all


Is Jessica McCaskill the real deal? Or will Cecilia Braekhus correct a misstep?

Those are the pertinent questions going into an interesting rematch on the Juan Manuel Estrada-Roman Gonzalez card Saturday night at the American Airlines Center in Dallas (DAZN).

And both women are certain the answer will be “yes” as it applies to them.

McCaskill stunned the boxing world when she defeated Braekhus by a majority decision in her 11th fight last August on the streets of Tulsa, Okla., taking the “First Lady’s” perfect record and her four welterweight titles in the process.

Braekhus, 39, mentioned the possibility of retirement before exercising the rematch clause in their contract. McCaskill boldly plans to usher her rival into the next phase of her life.

“This is the biggest retirement party DAZN has ever hosted,” she said. “There’s probably going to be cake and juice afterwards. This is going to be it. She’s the one that alluded to it after losing in Tulsa. She seemed super relieved after losing, and I am just giving her what she wants.

“Once someone shows that weakness, shows they are not in it and talks retirement, that shows that they are mentally out of the game.”

McCaskill (9-2, 3 KOs) was an accomplished fighter before she met Braekhus – she entered the fight as a unified 140-pound champion – but that victory put her in the spotlight.

If she loses on Saturday, people will say in so many words that she caught Braekhus on a bad night in August. If she wins, if she beats the future Hall of Famer a second time, no one could question her credentials.

She’s well aware of that fact.

“Yeah, I want to seal the deal and solidify my win in August and let everybody know it wasn’t an accident and that was definitely me, unified, undisputed world champion,” she said at the final news conference Thursday. 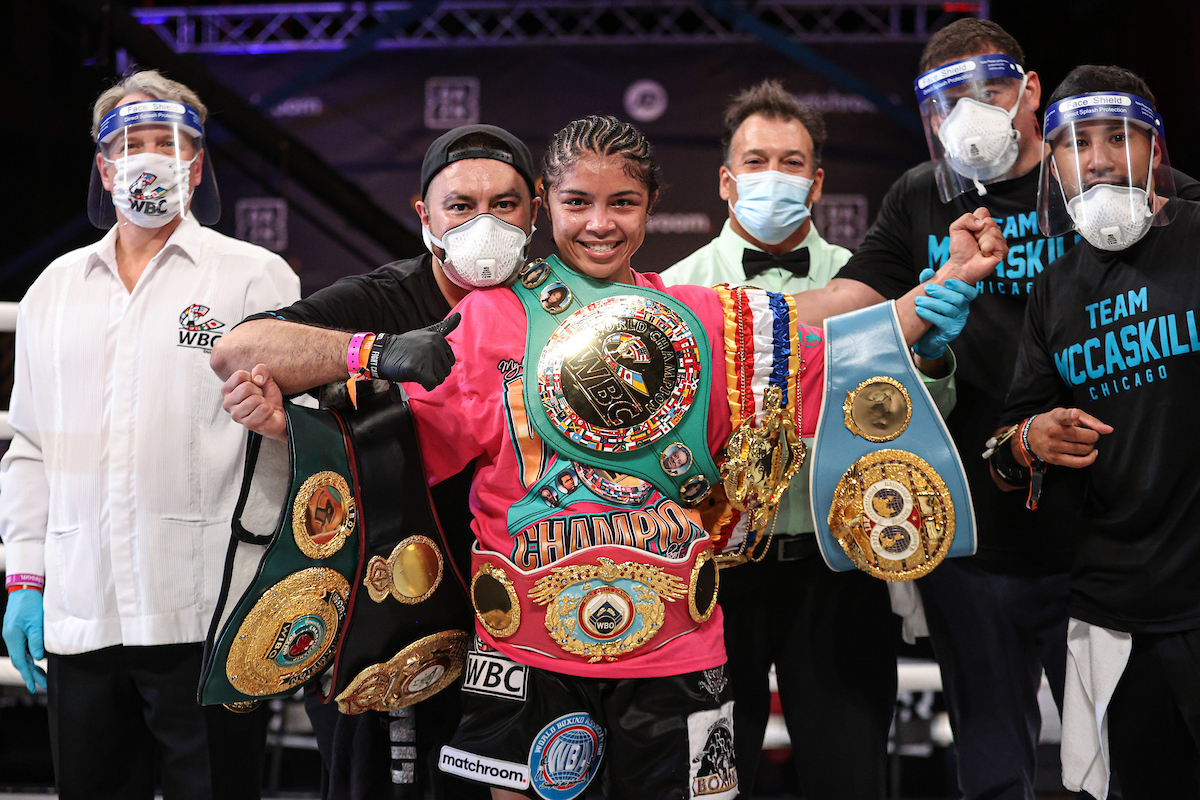 Jessica McCaskill shows off the fruits of her labor after stunning Cecilia Braekhus in August. Ed Mulholland / Matchroom

The typically polite Norwegian has responded to McCaskill’s provocative statements in kind. And she seems to be feeding off her rival’s words, as if she needs motivation for a fight that could end her career.

“[She] has kept me motivated throughout camp … all the trash talk,” Breakhus said. “The last time she was lucky. I think that’s where the trash talk comes from. … I had a rough training camp last time. I was stuck for six months in Big Bear (Calif.). Now I had a normal training camp.

“I have to do what I always do. I have to box, do whatever. I think I can stop her too. I’m definitely bigger and stronger than her and a much better boxer. … I’m very confident going into this fight.”

Braekhus still insists she deserved the decision in the first fight, in which she rallied in the later rounds yet lost 97-94, 97-93 and 95-95. She suggested Thursday that McCaskill, a Chicagoan, benefitted from home-country scoring and a catch weight of 145 pounds.

The former champion also acknowledged that she wasn’t at her best that night.

“What can I say? That night I didn’t perform at my top,” she said. “Saturday I will be at my best. She’s nowhere near my level. … I will win. So [retirement] is not even an option.”

McCaskill was given a chance to make a final comment and spoke from the heart: “I’m so ready to punch Cecilia in the face.”

It seems they both feel that way.

Tyson Fury through the years

Parker and Joyce play the elimination game in Manchester