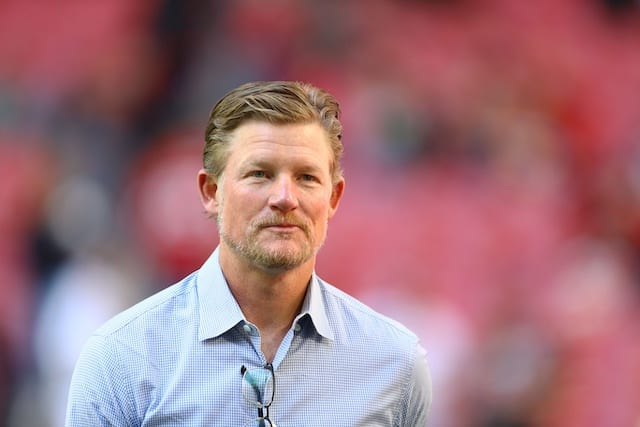 Los Angeles Rams general manager Les Snead has a busy offseason ahead of him if he hopes to prevent too much roster turnover from taking place leading up to the 2021 NFL season.

The NFL has announced that the salary cap for the upcoming season will be set at $182.5 million. The Rams have the biggest deficit in the league at $33.1 million over the new cap.

Trading quarterback Jared Goff and releasing running back Todd Gurley left the Rams with $34.1 million in dead money charges this offseason. L.A. has a handful of players set to test the market as free agents and virtually zero resources in order to bring them back, which leaves Snead in a tight spot once the new year begins on March 17.

Their situation indicates that the Rams could be poised to make some major cost-cutting moves. Fortunately, Snead plans to prioritize restructuring contracts instead of releasing players, per Gary Klein of the Los Angeles Times:

“That would be priority No. 1,” Snead said during a videoconference call with reporters. “This has been an ongoing process probably for … the last two or three weeks, trying to work with everyone to come up with win-win solutions for player and club.”

Snead added that the front office has reached out to certain players in search of a solution:

“You’ve had to knock on the door of a lot of our key figures, key pillars and ask him to in some cases make sacrifices, in some case adjust their contract to help us get under the cap,” Snead said. “The vision right now is to get to the finish line without having to release players.”

There is no question that the Rams find themselves in a major hole to begin the offseason. After all, they pulled the trigger on a trade for quarterback Matthew Stafford in order to maintain Super Bowl expectations rather than usher in a rebuild.

Snead’s comments indicate that there is a sense of optimism on his part after doing his due diligence on the team’s cap situation. Of course, he is going to need some help from key players that are willing to sacrifice some money in pursuit of a championship.

Defensive lineman Aaron Donald and cornerback Jalen Ramsey will account for a combined $50.4 million against the cap this year. Wide receivers Cooper Kupp and Robert Woods could also be candidates for a restructure with their combined $28.4 million hit.

There are also more veteran options to work with such as left tackle Andrew Whitworth ($11.2 million) and defensive lineman Michael Brockers. It will be interesting to see which approach Snead ultimately goes with.

Marcus ‘Buchecha’ Almeida vs. Ji Won Kang off ONE on TNT 2

‘In this day and age’; Gerrard reveals how he deals with Villa problem he loathes