Jim Gaquin loved his wife, Lois, his extended family and Boston University athletics. He also, as many know, loved golf.

Golf gripped this amazing man in its palm and helped lead to a life that included the likes of Arnold Palmer, Jack Nicklaus, Gary Player, Ben Hogan, Byron Nelson and every PGA Tour player from the 1950s through 1978, his final year as tournament relations manager for the United States Golf Association.

After 20 years of essentially living out of a suitcase, it was then that Jim and Lois decided that Cape Cod was going to be their final destination.

And, for those of us fortunate enough to know and work with this couple, it was a day that impacted all our lives.

Sadly, 5½ years after losing Lois to cancer, Jim left us bereft of his knowledge, his fierce loyalties and his friendship when he died Saturday at the age of 98.

There will be a celebratory Mass for Jim at 11 a.m. Monday at St. Francis Xavier Church in Hyannis followed by his burial at the family plot at 2 p.m. at The Gardens of Gethsemane Cemetery in West Roxbury.

It has been over a year since I last visited Jim in person at Mayflower Place Nursing and Rehabilitation Center in Yarmouth — not because I didn’t want to, but because COVID-19’s impact on our world prevented me from doing so.

Jim moved there two years ago as his mobility became limited and he could no longer do things physically that he was doing at age 95, such as jogging (not walking) down Buck Island Road as part of his daily routine. His mind was still as sharp as a tack (perhaps sharper) and his thirst for information — especially involving local golf — was unquenchable.

His ability to recall dates, facts, situations to the minutest detail always blew me away. He could recall a specific shot from one of the many tournaments he and Lois worked during their storied career. He had tales that kept you riveted to the conversation and always praise for something someone had accomplished. He asked about family, how the high school golf team I coach was performing, what my kids (now adults) were doing and how my wife, Deborah, was. 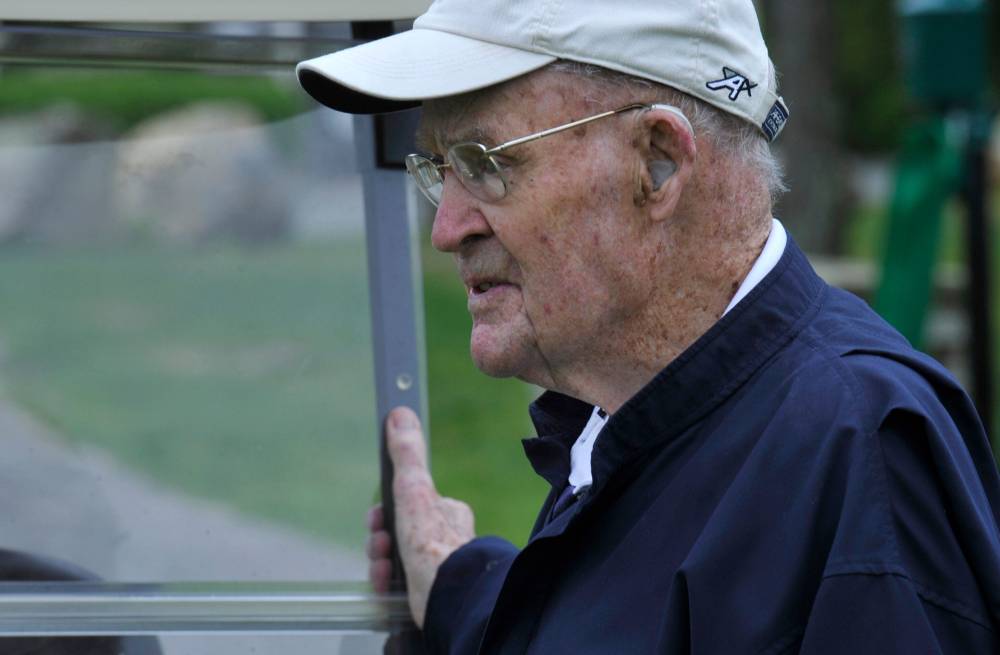 His love of BU athletics also was accompanied with background information including specific players, games and results. When Boston University canceled its (then) Div. 1-AA football program, he was so upset he wrote a letter to the school’s chancellor berating the decision and informing him that Jim would no longer be making contributions to the school.

Jim was as “old-school” as one could get. He believed that the old ways of doing things worked just fine and he was dragged kicking and screaming into the 21st century (at the time, it was the 20th century). He was more comfortable writing his press releases or tournament stories on an IBM Selectric than using a computer.

For tournaments that Jim and Lois ran, it was mandatory that paper scoring strips be the order of the day as opposed to running scores from a computer onto a picture screen. It took much more time and often pushed reporters to their deadlines, but it was the way it used to be and in the long run, it was fine. I’m sure there are many winners of the Cape Cod Open, Cape Cod Senior Open, The NCAA Women’s Golf Championship and weekly Pro-Ams that have those strips of scores hanging in a trophy area as proof of success on the links.

Fortunately for Jim, Lois was more than willing to grasp the future and as a team they put together such things as the Cape Cod Open, of which Jim was director until he relinquished the post after the 2019 event. They ran the 1984 U.S. Women’s Open at Salem Country Club and teamed up for one of best NCAA Division 1 Women’s Golf Championships in 1985 at the Country Club of New Seabury.

From that event, 36 players ended up competing on the LPGA Tour.

They took over the then-longest-running league in the country in 1985, the Cape Cod Pro-Am Golf League. At that time it was gasping for air and on the edge of extinction. They ran it through 1998. When they took over, the league had 82 members, barely had enough players for each weekly event and it was on the verge of bankruptcy. When they were unceremoniously ushered out the door in 1998, the league had 400 members, a full field each week that was playing for $4,000 in prize money and chits.

The league has since folded and no longer is a part of the golf agenda on Cape Cod.

A major component in the Gaquin business of running golf tournaments was charities. The Cape Cod Open, which started as the Brookside Hospital/Sally Quinlan Pro-Am, has collected in its history over $250,000 for charity. Jim was a contributor to the Ouimet Fund and was one of the many interviewers of potential scholarship winners.

Obituaries will tick off the list of accomplishments of Jim Gaquin: sports reporter for the Waltham News-Tribune, a news reporter for the Worcester Telegram, field secretary for the PGA Tour and then as its tournament manager. He was the executive director of the Royal Canadian Golf Association, tournament relations manager of the USGA, winner of the prestigious Golf Writers Association of America William D. Richardson Award for contributions to the game, tournament manager for the 1980 and 1981 PGA Championships, the 1984 U.S. Women’s Open at Salem Country Club, 1985 NCAA Division I Women’s Golf Championship at New Seabury, founder of the Cape Cod Open, founder of the Cape Cod Senior Open, and a rules committee member of the Massachusetts Golf Association. One thing that may not show up, but should, is good friend.

After Lois died in 2014, a part of Jim died with her. She was his rock, his partner, his best friend and despite putting on a brave face and marching forward, he missed her.

“We’ve been a team since we married,” Jim said. “I can’t remember what it was like before and I don’t know if I can handle what it is going to be after. I couldn’t boil water because I didn’t know how to. Lois would never let me in the kitchen — for good reason. Now, I have to adjust and try to move on without her.”

Jim entered my life “back in the day.” He was an encyclopedia of golf knowledge and facts. He was a guy who gave me more tips than a waiter could earn in a lifetime.

He was a good guy. He was my friend.

You are missed, Jim.

Tuchel offers hope to Chelsea star who may be growing 'impatient'

55 years ago tonight, Bob Arum did the most challenging promotion of his career

The New York Giants desperately need to draft an edge rusher, but when? – NFL Nation

Stefanos Tsitsipas is better but Andy Murray has nothing to lose