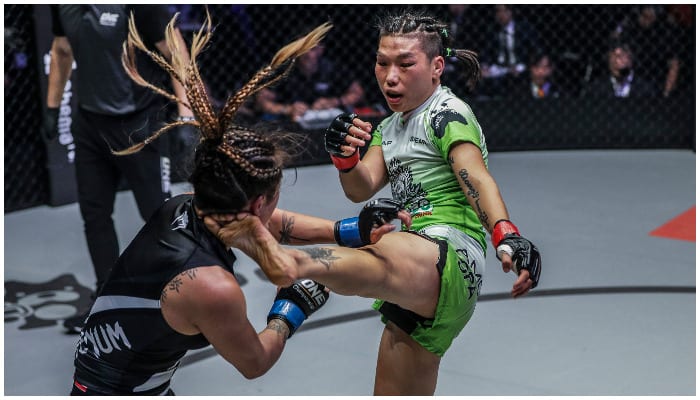 One Championship has announced their plans to hold an all-women’s card centered around the Women’s Strawweight title fight between champion Xiong Jing Nan and challenger Michele Nicolini.

First reported by ESPN, the event titled Empower will contain five fights all with the four outside the main event being part of the first round of the Women’s Atomweight Grand Prix.

This event will be held in Singapore and take place on May 28.

Jing Nan will enter this upcoming defense coming off a win over Tiffany Teo in October of 2020, while her opponent Nicolini also enters with a win in her last fight against Atomweight champion Angela Lee.

The Atomweight Grand Prix will be three rounds with the winner setting themselves up to face Lee upon her return. Currently, Lee is sidelined due to pregnancy.

In the first round, Denice Zamboanga will take on Seo Hee Ham, with the winner to take on the victory between Alyona Rassohyna and Stamp Fairtex next.

On the other side of the bracket Meng Bo will face off against Ritu Phogat and Alyse Anderson will take on Itsuki Hitara.

According to ESPN’s report, there is yet another “major” fight to be added to the card separate from the tournament, and also a series of alternate bouts to be announced in the future.

ATP Tour and WTA 2022: Schedule of Play for Thursday August 25 for Winston Salem, Granby and Cleveland

Which batsman from the past eras do you think would have been a bunny of, or atleast would have struggled against a great bowler from this era? : Cricket