ENGLEWOOD, Colo. — Denver Broncos coach Vic Fangio didn’t cover his eyes when he went back and dug through the shattered pieces of the 2020 season, but what he saw upon further review of the 5-11 finish didn’t shock him either.

“I didn’t see a whole lot that I wasn’t expecting to see,” Fangio said. “… I wasn’t surprised by the cut ups and what the offseason study has shown thus far.”

But a complete review — snap-by-snap, game-by-game — of the season does shed some light on what the Broncos need to repair.

Start there. Eleven playoff teams finished in the top-10 for turnover margin. The Broncos were last in the league at minus-14, leading the NFL in interceptions on offense and finishing 29th in takeaways overall.

Opponents scored 100 points off Broncos turnovers — or 22% of the points the Broncos allowed all season. Trace plenty of the troubles on offense back to quarterback Drew Lock, but there is an element of schematic stubbornness there as well.

Lock threw all 15 of his interceptions on plays that began in the shotgun and 14 of them when the Broncos were in a three-wide set. Lock also threw 12 of the interceptions where the defense had help in coverage.

Defensively, the Broncos didn’t consistently generate enough stress on opposing offenses to force mistakes. The Broncos banked on the idea teams would move the ball between the 20s and they could hang on in the red zone — they were No. 1 in the league in red zone defense but still 25th in scoring defense.

One especially red flag on the game video was splash plays allowed in the run game — 51 run plays surrendered more than 10 yards. And on third down, opponents converted more than 71% of their rushing attempts for first downs on third-and-5 or shorter.

Sure tacklers, cornerbacks and some more pop on the edge will be on the shopping lists in both free agency and the draft.

The Broncos, with a full-speed return of Courtland Sutton to the lineup in 2021, would seem to have the personnel to do what most everyone in the league is doing: go to a three-wide receiver formation and fling it around.

It’s just most of what the Broncos found in three-wide in 2020 was trouble. Twenty-one of their 30 sacks allowed were in three-wide, along with 20 of their 22 interceptions and both of their intentional grounding penalties.

It would all seem to fly in the face of the, “If you can’t block it, don’t play it” logic.

With Lock in the shotgun — especially in three-wide — the Broncos were far more apt to surrender pressures and it also allowed defenses the freedom to spice up coverages out of nickel and dime packages. The Broncos, with Lock in his first full year as a starter, could have gotten far more balanced, traditional looks in coverages had they simply bulked up their own formation and balanced things out — something Mike Shanahan often did against Bill Belichick’s defenses through the years.

Lock threw 13 of his 15 interceptions out of the pocket — he wasn’t on the move or “extending plays” as he says is his strength — and again, threw all but three interceptions to where the defense had help on the intended receiver. Three-wide defenses got to play the way they wanted and the Broncos kept making mistakes.

Lock threw no interceptions on plays that started under center and just one interception on any snap in two-tight end or two-back sets. The Broncos need Ja’Wuan James to return at right tackle, better play at guard and a big jump in Year 2 for Lloyd Cushenberry III to help protect Lock, or they need Lock to get far better with his footwork/decision-making out of the shotgun. Or they need to change their formation.

Very few opposing defensive coaches expressed concern about what the Broncos could do in three-wide last season and will certainly make the Broncos prove they’re better in 2021 before changing their scheme.

Tape review shows the Broncos had 26 drops this past season, 18 coming from rookies Jerry Jeudy — he had the five-drop nightmare in Los Angeles in Week 16 — and KJ Hamler.

Jeudy has already posted some of his offseason work on social media and vowed as the Broncos adjourned in January that 2021 would be far better. Hamler, who finished the season on injured reserve with a concussion, missed most of training camp with a hamstring injury.

A breakout by Jeudy, who repeatedly put veteran defensive backs through a turnstile with his route-running, will be an immediate boost in the offense. But Cushenberry III needs a significant jump at center as well, especially with better lower body strength to hold his ground against the bigger defensive tackles he faces.

The Broncos largely stood pat on the coaching staff and given the turnover — especially at offensive coordinator — since Denver’s Super Bowl 50 win, there is something to be said for that. But those returning coaches need to do better on the scripted plays for opening drives of both halves. 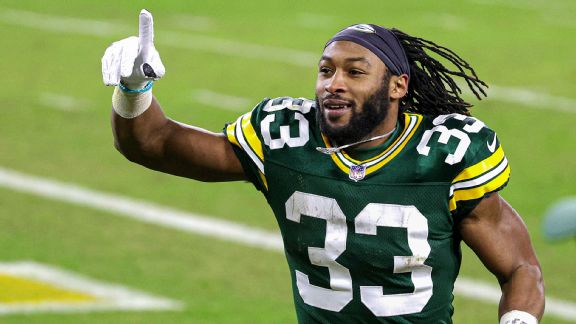 • Salary cap space for all 32 teams
• Cowboys’ belief in Dak: ‘We got it right’
• Will Colts spend big on pass rush, O-line?
• What could be Bucs’ Plan B in free agency?
• WFT has roster holes, but ‘not desperate’

The Broncos did not score a touchdown on their first drive on offense all season and scored just three field goals overall on those game-opening drives. Eight of those drives (50%) went for 30 or fewer yards, with four of those possessions going for 5 or fewer yards.

The Broncos opened the second half of games with touchdowns on their first possession just three times.

In all, the team held the lead just 28% of the time and did not hold the lead at all in eight of their 11 losses.

The Broncos consistently lost the preparation/adjustment battle and that’s not all because of the players on injured reserve.

Injuries did push plenty of players into more prominent roles on these units than expected, but across the board the Broncos routinely surrendered too much field position, momentum and potential points.

Long-time NFL writer Rick Gosselin has released his annual special teams rankings for decades, a variety of kicking, punting and coverage categories, and this year the Broncos once again checked in well below a playoff level — at 21st overall.

What Is Dan Campbell’s Slack, Who’s Ahead In The MVP Race, And Which Week 5 Games Excite The Most?

Dallas Cowboys' belief in Dak Prescott: 'We got it right' - NFL Nation

Daniil Medvedev On Clay: ‘I Need To Be In The Zone’ | ATP Tour

Becky Hammon Happy With Her Decision To Coach The Aces

Tsitsipas Sets Up Blockbuster Third Round Encounter with Kyrgios at Wimbledon

Conor McGregor blasts Rafael Fiziev after online argument: “You are yet to do anything significant in this sport”