SEATTLE — The Seattle Seahawks cleared more than $14 million in cap room when they released defensive end Carlos Dunlap earlier this week. It didn’t take long for observers to start connecting the imaginary dots and assuming the Seahawks were freeing up money to get quarterback Russell Wilson some high-priced help on the offensive line.

To be sure, the savings from Dunlap’s release would be enough to help the Seahawks make a run at one of the big-named offensive linemen who are about to hit free agency such as center Corey Linsley (an All-Pro with the Green Bay Packers last season) or left guard Joe Thuney (who just played on the franchise tag with the New England Patriots). Those are the two positions where Seattle is unsettled up front.

To be even surer, signing one of those players would placate Wilson and turn down the temperature on tensions that are still running hot in the wake of the quarterback publicly airing his frustrations with the organization last month. Among those frustrations: all the hits he has taken behind an offensive line he wants to see upgraded.

“I think that’s a big thing that we’ve got to fix,” Wilson said of his pass protection on “The Dan Patrick Show.” “That’s got to be fixed and has to be at the end of the day, because my goal is to play 10 to 15 more years.” 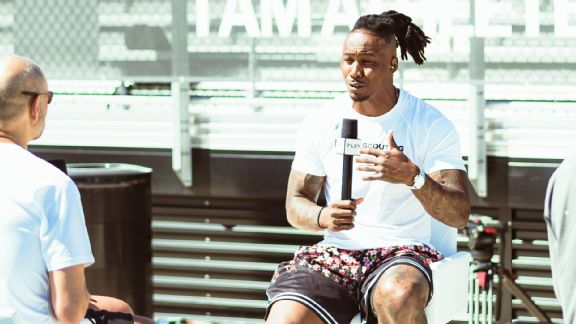 The Seahawks will sign offensive linemen in free agency and they’ll spend some money to do so, but it doesn’t seem likely that they’ll depart from their usual approach and make a top-of-the-market splurge on any one player.

That has been especially true in recent years.

Since 2016 — when the first of Wilson’s two massive extensions kicked in — the Seahawks rank 31st in total contract value given to external free agents, according to ESPN Stats & Information research. In terms of annual average, Ezekiel Ansah’s one-year, $9 million deal in 2019 was the biggest Seattle has given to another team’s free agent since Schneider and coach Pete Carroll arrived in 2010.

Dallas and Pittsburgh are the only other teams whose priciest UFA addition since 2016 does not exceed $9 million APY. The Seahawks haven’t brought in a UFA for more than $20 million in overall base value since Sidney Rice and Zach Miller in 2011.

Schneider’s comment about not breaking the bank was a preface to his response when asked about the four offensive linemen Seattle signed last March.

Of the four, right tackle Brandon Shell’s two-year, $9 million deal was the biggest. He’s the only one who remains (center B.J. Finney was sent to Cincinnati in the Dunlap trade after showing up out of shape, guard Chance Warmack opted out and was recently released, and Cedric Ogbuehi is again a free agent after adequately filling in for Shell for four games).

While Shell proved to be a nice addition, Wilson has grown tired of the Seahawks’ reluctance to spend big money up front. It’s not a coincidence that the four teams on his initial list of acceptable trade destinations — Dallas (before Dak Prescott’s extension), Las Vegas, Chicago and New Orleans — have all shown a recent willingness to field high-priced offensive lines.

The Seahawks, though, would tell you that their bargain approach to free agency is the smart way to go and necessary for a team with a quarterback who makes as much as Wilson. They don’t want to get into a bidding war in March and overpay for an offensive lineman at the expense of a better player who might become available for less money later on.

In a year in which every team is feeling the pinch of a reduced salary cap, the Seahawks expect more good players than usual to become available after June 1. And like in any year, they’ll want to save some of their spending for in-season additions like the ones they made via recent trades for Dunlap and Quandre Diggs.

All that considered, it’s hard to see the Seahawks signing Thuney if it’s going to take a top-of-the-market deal. A more likely option at left guard might be someone like Kevin Zeitler, who was just released by the Giants. A college teammate of Wilson at Wisconsin, Zeitler is a solid and experienced starter who will probably be more in Seattle’s preferred price range.

If the Seahawks don’t re-sign Ethan Pocic, Austin Blythe could be an inexpensive alternative to Linsley at center and would help with Seattle’s offensive transition under new coordinator Shane Waldron, who coached Blythe with the Los Angeles Rams.

The Seahawks expect Waldron’s scheme changes to alleviate their issues in pass protection, which could lessen the degree to which they prioritize upgrades to their line.

It all points to the likelihood of the Seahawks sticking to business as usual in free agency, maintaining their patient approach and not giving in to pressure to break the bank on a left guard or center — as much as their frustrated quarterback wants them to.

And if their way doesn’t yield improvement in 2021, Wilson will likely go from wanting upgrades to wanting out.

Everton open talks with another star over new contract

MI begin hunt for hat-trick of titles against RCB