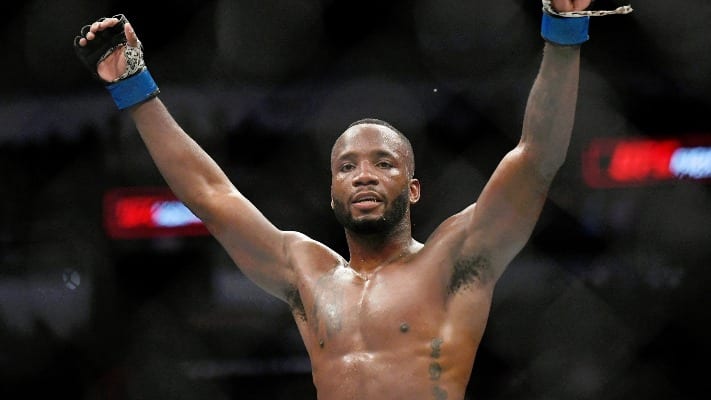 Top-ranking UFC Welterweight contender Leon Edwards faced a worst-case scenario when his main event bout against Belal Muhammad at UFC Vegas 21 was stopped due to an accidental eye poke.

This recent bout marked his return to the sport after an almost two year layoff due to bout cancellations and COVID complications.

In his return, Edwards appeared to be performing well hurting and dominating Muhammad in the first round, however, the No Contest verdict adds a blemish to Edwards’ nine fight unbeaten streak.

This being the case, Edwards still believes that a title fight should be next for him. Speaking at the ESPN post show, Edwards detailed why he believes this.

“That’s nine fights in a row, I’ve fought everyone they’ve given me, I’ve stepped up to fight all the top guys they’ve all turned me down so,” Edwards said.

“I belong in a title shot, I have worked my way back up from getting defeated by Kamaru Usman, I have fought everybody, I have offered to fight everybody so I feel I deserve A title shot now, why should I do another ten fights to get a title shot you know?”

Edwards last loss was to the current champion Kamaru Usman by Unanimous Decision back in 2015, in a bout that was the fourth of his UFC career.

Since this loss Edwards has strung together wins with his most recent coming against former Lightweight champion Rafael Dos Anjos in July of 2019.

As it stands, the UFC has not made any comment on what they plan to do following UFC Vegas 21. It remains unclear if the plan will be for Edwards and Muhammad to rematch or if he will step into the cage against a different opponent in his next fight.

Who do you believe Edwards will face off against next?