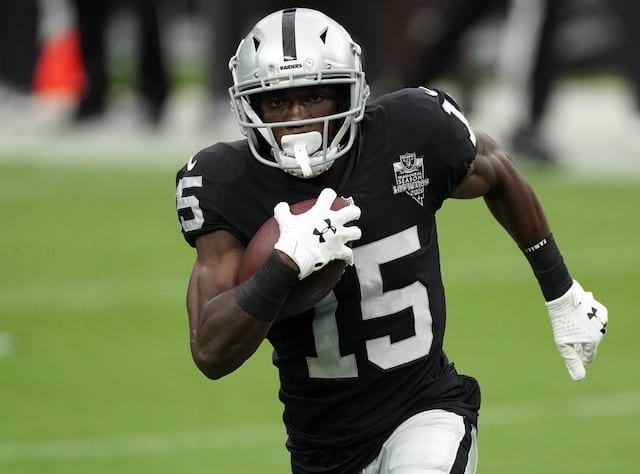 The highly anticipated start of the NFL free agency period is nearly here, and there is widely expected to be plenty of player movement throughout the league.

The reduced salary cap has forced nearly every team into tough cuts, which has added to the talent in the free-agent pool. While most organizations are struggling to get under the cap, the Las Vegas Raiders have a little more than $20 million in space to play with.

The Raiders are widely expected to chase after high-end defensive talent, particularly in the secondary, but also have decisions to make on some of their own players. One person of particular interest is Nelson Agholor, who looked rejuvenated playing under head coach Jon Gruden and turned into a reliable target for Derek Carr.

Agholor showed he is deserving of more money, and according to Vic Tafur of The Athletic on the State of the Nation podcast, he believes the receiver would love to stay for the right deal.

“I think he has kind of taken on a leadership role,” Tafur said. “He’s been around the facility the last few months even though he’s going to be a free agent so I think that’s a good sign. I think he wants to come back. He likes his role. He likes the young guys on the team. He likes Derek Carr. They had good chemistry last year.”

“So to me it comes down to money. I really have no idea how the market it going to play out. He’s in the middle of these top 15 guys who are going to be available in free agency, so I think if the price is right, they want him back. So I think that’s the way I’m leaning… I think he would definitely be happy coming back.”

The wide receiver market is flush with several high-profile names like Kenny Golladay, JuJu Smith-Schuster, and T.Y. Hilton, so it stands to reason that Las Vegas can retain Agholor at a reasonable number. The former Trojan was a serviceable deep threat in Gruden’s passing attack and showed he could win in both the short and intermediate areas.

Keeping Agholor would bode well for the Raiders’ offense during the 2021 season, and so far, it looks like that will be the case.

Another red card dished out to ‘recidivist’ Scott Barrett

Hector Garcia: I Don’t Think Colbert Is Gonna Be Trouble For Me At All; Not Concerned