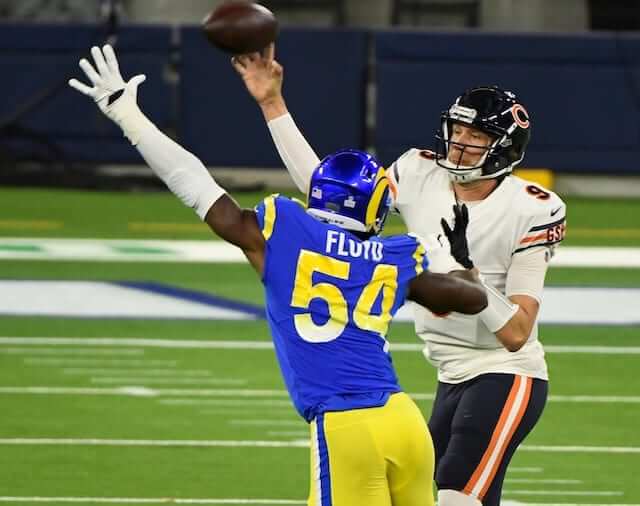 The Los Angeles Rams finished the 2020 campaign boasting the top-ranked defense in the league. Unfortunately, it now remains to be seen whether or not they will be able to keep this group intact with a number of key players set to hit the market.

Among the notable names set to become an unrestricted free agent when the new league year begins on March 17 is linebacker Leonard Floyd.

Floyd enjoyed a career year while playing an integral role in this elite defense, As a result, he is expected to receive a nice payday in free agency this offseason.

The Rams are currently strapped for cash at $33 million over the salary cap. Despite their financial situation, NFL Network’s Tom Pelissero reports that they are still optimistic about bringing Floyd back:

General manager Les Snead has acknowledged the unfavorable financial predicament the Rams find themselves in this offseason. Regardless, he is still confident that the front office will be able to limit the turnover by restructuring a few deals from those already under contract.

Of course, it is going to take some major work if they hope to clear up enough space to make another run at Floyd. He managed to get his career back on track by registering 50 tackles and 10.5 sacks as part of the No. 1 defense in the NFL in 2020.

The Rams have good reason to be adamant about signing Floyd to a long-term deal this time around. Not only are they in need of a steady pass-rusher to make plays alongside defensive tackle Aaron Donald, they already owe him dead money over the next two seasons since the one-year, $10 million deal he signed carried just a $6.6 million cap hit.

L.A. has a track record of getting plenty of bang for their buck from former first-round pass rushers. Before Floyd, it was linebacker Dante Fowler Jr. who benefitted from a productive year that ultimately led to a big contract from the Atlanta Falcons.

It appears the Rams are going to do what they can to not let history repeat itself by letting Floyd walk in free agency. However, it remains to be seen how exactly Snead plans on making it come to fruition.

Struggles were not down to lack of a shakedown

BOUTIER LEADS THE WAY AFTER DAY TWO IN BORDEAUX

Tennis for Children – Best Sport for All Ages