Manchester City made sure of their place in the last eight of the Champions League with a straightforward 2-0 win over Borussia Monchengladbach.

Already 2-0 up on aggregate after the first leg, City sat in a strong position heading into the reverse fixture- again held at the Puskas Arena due to Covid travel restrictions.

And goals from Kevin de Bruyne and Ilkay Gundogan saw City easily progress into the draw for the quarter final.

They looked comfortable from the off and had soon gained control of possession, which led to them carving out their first chance of the night after seven minutes.

Joao Cancelo found Phil Foden in space just yards out from goal with a well-weighted chipped pass into the box, but the England international couldn’t guide his attempted first time finish past Jan Sommer.

Pep Guardiola’s side would have to wait just another five minutes before they did hit the front though, a sumptuous strike from de Bruyne extending their lead in the tie. The Belgian let Riyad Mahrez’s pass from the right roll across his body before unleashing a thunderous left-footed shot which crashed in off the crossbar.

And City were 2-0 up before the 18th minute, Gundogan continuing his fine goal-scoring form this season by calmly rolling past the Monchengladbach ‘keeper and into the bottom left corner after being played in by Foden.

The German had an opportunity to double his tally just before the half hour mark, however he couldn’t prod home after controlling well on his chest. 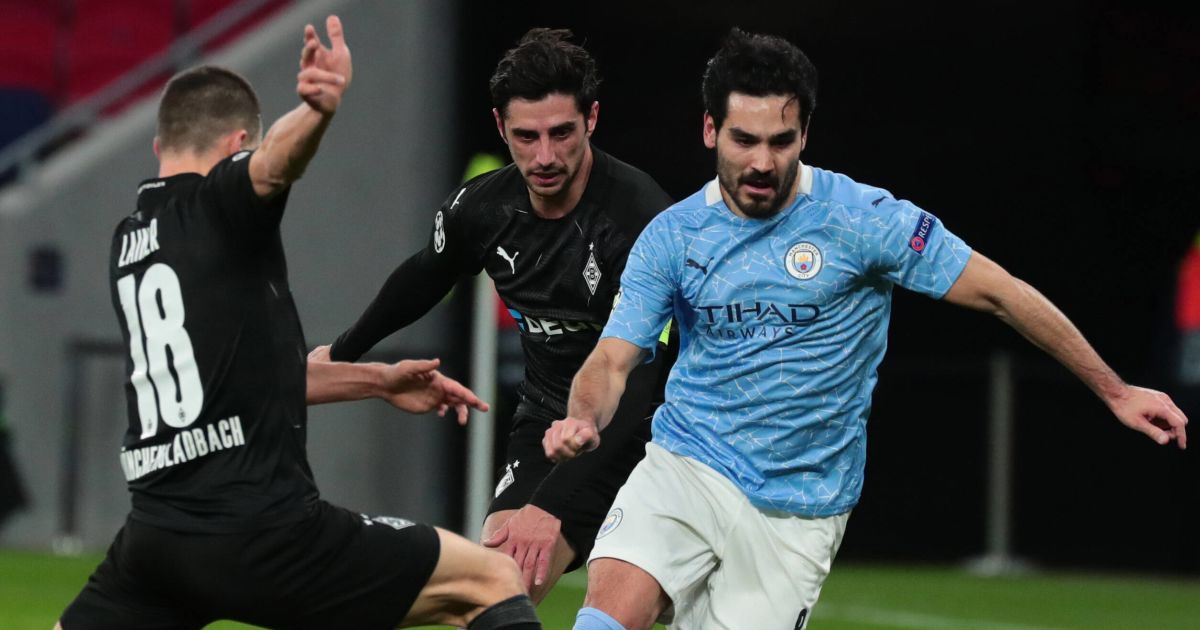 De Bruyne then troubled Sommer with a dipping free kick in the 35th minute, forcing the Swiss stopper to tip over the bar to prevent what seemed an inevitable third goal for the Premier League side at the time.

The Germans, anonymous as an attacking threat for much of the first period, did come close to pulling one back in the 41st minute when Breel Embolo flashed a shot across Ederson, but he couldn’t quite squeeze the ball inside the far post.

City continued to dominate after the break, having close to an 80% share of the possession between the restart and the 60th minute.

As such, they were still the bigger goal threat but weren’t quite as hot as they had looked in the opening 20 minutes.

Mahrez was heavily involved and had numerous opportunities to punish Monchengladbach, however he was unable to either score or provide a second assist much to his frustration.

With the tie wrapped up, Guardiola made the most of the opportunity to make some changes to see the game out, making all five of his permitted changes before the 75th minute.

First, Fernandinho and Oleksandr Zinchenko replaced Rodri and Joao Cancelo, before Raheem Sterling took the place of Gundogan and Aymeric Laporte took over from Ruben Dias. Finally, Sergio Aguero got some more minutes as he came on for Bernardo Silva.

Hannes Wolf had Ederson worried with a well-struck effort from outside the box, but the ball whistled narrowly over the bar, but that was Gladbach’s only notable effort of the half as their European campaign came to an end with a whimper.

As for City, though, they looked as strong and assured as ever as their quest to finally land a Champions League crown moves forward.

Devin Haney On Vasiliy Lomachenko: "There’s Different Ways That He Can Be Beat

ATP Tour and WTA 2022: Schedule of Play for Thursday August 25 for Winston Salem, Granby and Cleveland