Lookback at India’s Selection and Batting Strategies for the 3rd T20I : Cricket

I know winning and losing are parts of the game, but yesterday’s loss was frustrating. Felt like every thing was going wrong even before the match started. Team selection felt odd to me to be honest. So here is my Rant/Analysis(?) post of India’s performance in yesterday’s match.

Ishan Kishan made a blistering 50 the previous match as opener, but was pushed to No. 3 yesterday. I believe, this was wrong as this does no good to a youngster’s confidence as he has no security of batting position as he is anyway gonna lose it once a big player returns. But this, still can be understandable, as India may have wanted to accommodate Rohit in the batting order and his best comes out at opening.

Suryakumar Yadav was apparently dropped as well without even getting an opportunity to prove his worth! This, in my opinion is probably the harshest treatment one can give a debutant. Dropping without even batting once is unbelievably brutal to any player, let alone a debutant.

Now don’t get me wrong. I am not saying either of the above changes was unnecessary. There was no way Rohit could have fit in our batting order without making these changes.

The alternate players who could have been dropped to accommodate Rohit-

What could have probably been done? Not exactly sure to be honest. The only sensible solution that I can think of as an alternative was to probably stick to your winning combination from the last match, but that never was an option. Rohit was the incumbent and had done nothing wrong to be dropped.

Could Rohit have been rested furthermore, as we all know that he is a almost surely gonna play the T20I WC? Maybe. But then Kohli said in the first match pre-match interview that Rohit was gonna play the 3rd match and not playing him would have looked pretty awkward then

I feel the management itself dug up a hole where they fell. Dropped Dhawan after one chance, who probably was the backup opener fir the World Cup. Now what’s ahead in his T20I Career is not even secured by the 4th match. Kishan who had also put his name forward as opener, is not even opening now. Suryakumar Yadav, who probably was a front runner in the middle order is no longer even in contention of Playing XI. We can neither drop Kishan, nor Iyer to accommodate him for the last 2 matches, as none of the two have done anything wrong to be dropped. Both had had one good innings this series.

What’s forward? Two matches of this series left. I genuinely believe India should try to play same squad in both the matches (if possible, the squad that played yesterday) and look who performs, leaving the rest of the selection to IPL Performances as there is, if I remember correctly, no international T20I Matches scheduled for the time being.

Now, this was all that happened before the toss. Coming to the toss. I think we all knew we were gonna bat first, so no point in discussing that. Rather, it would be prolly be better to analyze the other phases of the match.

We fucked up there to be honest. It never looked like we got going. We were stuck throughout the powerplay, which is a genuine concern. None of our batsmen (except Kohli) could hold a candle in front of Jofra Archer and Mark Wood this match to be honest. One reason is probably excess of bounce on a red soil pitch. As Star Sports showed, there was excess of bounce (a difference of 32 cm between the previous match and yesterday’s match)and it was evident that our batsmen were struggling against them.

Though an interesting thing I noticed about England’s bowling approach towards KL Rahul. Seems like England had a fixed plan to bowl him outside off at the fourth stump line. Rahul faced 3 balls against pace (2 against Jofra Archer and one against Mark Wood, and all three were pitched at nearly the same line and length). All three were extremely quick and accurate. Jofra Archer’s deliveries [1.5, 1.6] he faced measured 144.6 and 143 km/h respectively. The next over, Mark Wood’s delivery [2.3] measured 145.6 km/h. The difference, however, was that Jofra Archer’s deliveries went outwards (outswing) whereas Mark Wood’s delivery sharply moved inwards. As evident from this highlight of the dismissal played for the outswinger whereas the ball moved in and crashed into the stumps. Seems like the English genuine 145k quicks would love to exploit this.

Rohit was most likely beaten by sheer pace. Looking at his dismissal, it is clear he was tying to break the shackles by creating room as the score was 20/1 after 4.3 overs. Wood followed him and made him play a compulsive Pull Shot and Archer was just there to grasp the catch.

Ishan Kishan’s wicket was a bit disappointing for me to be honest. He had faced 7 balls and the first spell of the pace attack of Wood-Archer. However, he succumbed to the bouncer of Chris Jordan [135.8 km/h]. 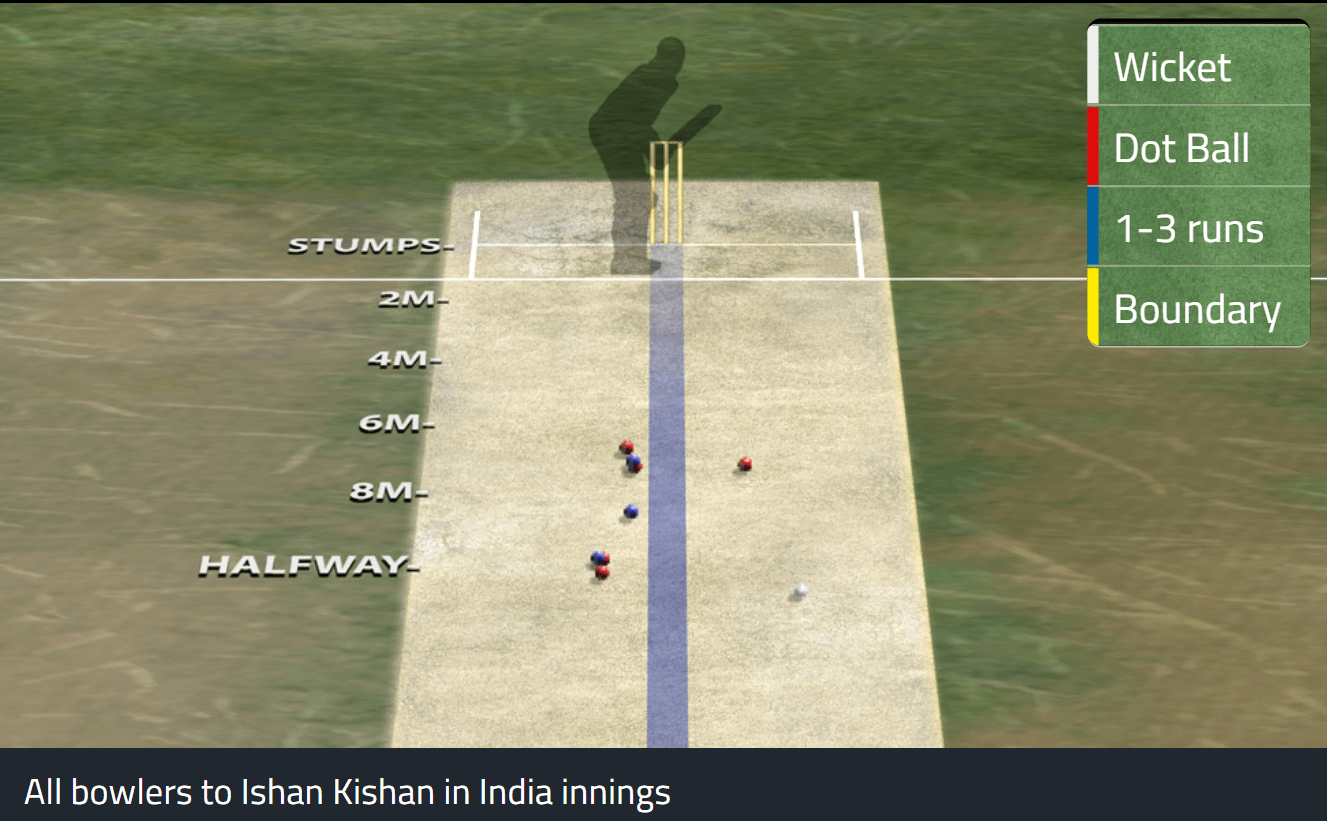 All the deliveries he had faced before that were accurate in line and length angled towards the body. Jordan’s delivery however, was wide outside the off stump that Kishan tried to drag towards the leg stump that he eventually top edged it. I am pretty sure he would learn from it with time though.

Not much to comment here to be honest. Probably if Pant’s run out didn’t happen, then the score would have been different. But then again, cricket can’t be played if you are trapped thinking about ‘ifs’ and ‘buts’. Virat Kohli carried his usual procession as India were effectively at 100/5 at the 16th over mark, i.e. 76 runs for the loss of 2 wickets in 10 overs at a r.p.o of 7.6. Not bad considering how poor our batting powerplay was. Pant was looking good in his short innings before the disaster happened. Iyer, however failed to score once again 🙁

One can say, that India however could have batted quicker without fear of losing wicket, considering likes of guys like Sundar and Thakur didn’t even bat. Yet, it feels uncharacteristic of India to me to be honest. One can’t completely change his approach one series before the T20 WC. Eoin Morgan took 4 years, built a entirely new squad from scratch and instilled a fearless mentality for this approach to have been successful, and replicating it few months before the World Cup is never going to be successful.

There seems to be another concern here to me to be honest. India did make 55/2 in the Final 4, which is wonderful considering the position we were in. However, one issue seems to have been highlighted here. Kohli scored wonderfully in the death overs, scoring 38 runs of just 13 deliveries, which however seems to have masked another issue. Hardik Pandya managed to muster only 16 runs of his 11 deliveries in the death. While this is still decent, you expect better from a guy like Hardik Pandya who is played especially as a power striker down the order.

Time and time again, one thing however is being exposed which I don’t get a feeling I like. Hardik Pandya struggling against fast hard length deliveries. Since IPL 2019, it has been the case. Pandya seems to be ready for Yorkers and outside off deliveries, but is completely missing hard length deliveries. Seems like England has realized this weakness and are trying to exploit it. None of the English pacers bowled a single Yorker!! Can you believe it? Still they managed to restrict Pandya to 17 off 15, with only 2 sixes. Out of which, one was hard slashed edge for six, and the other one was basically due to the awfully small size of backward boundaries at Motera.

So, ya. That’s my two cents on Indian batting and English bowling strategies that they probably used yesterday, especially against KL Rahul and Hardik Pandya.

Hope we see 2 cracker of the matches in the coming 5 days, instead of boring one sided matches that are basically decided by the winner of the toss. Hopefully, dew doesn’t play any major role in the next few matches that makes toss less relevant.

‘Give me any injection … what if this was a WC final?’: Suryakumar Yadav reveals late night conversation with physio before IND vs AUS series decider

Man Utd given incentive as defender fee plummets from £87m

FC Barcelona has the most expensive jersey in the EuroLeague, per report

NBA Rumors: “The big drama this summer is about Zion’s contract”