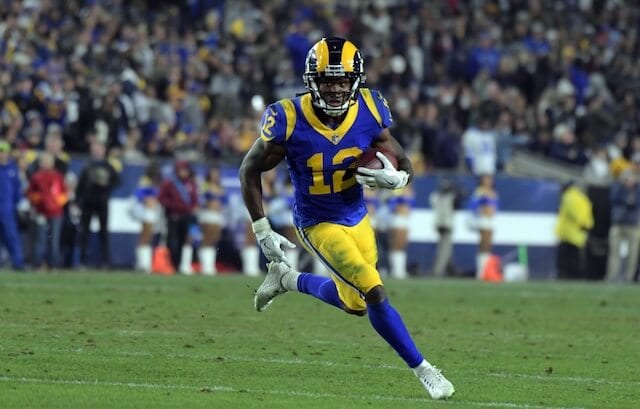 Los Angeles Rams head coach Sean McVay has not been shy about pointing out the shortcomings in his offense last season.

McVay criticized himself for the lack of explosive plays on offense during the 2020 campaign. He acknowledged that this will be a point of emphasis now that they have acquired Detroit Lions quarterback Matthew Stafford.

While Stafford’s arrival is a step in the right direction, the Rams could still be in the market for some more firepower to add to his disposal. It appears last offseason’s trade of wide receiver Brandin Cooks helped them realize as much.

Cooks’ departure left the offense without a bona fide deep threat that is capable of beating downfield coverage on a consistent basis. McVay feels this may be something they need to address the offseason, via ESPN’s Lindsey Thiry:

“I definitely think that you did feel not having Brandin this year,” McVay said. “What does that mean? I think that’s something that is important to look at.”

Although Robert Woods and Cooper Kupp remain as one of the most productive tandems in the NFL, Cooks’ departure left a notable void in the receiving corps. Receivers Josh Reynolds and Van Jefferson showed plenty of promise but were not able to replicate that same dynamic element on offense.

With Reynolds set to test free agency, the onus will fall on Jefferson to step up as the third option in the passing game. McVay’s comments indicate that the Rams will likely do what they can to add another explosive playmaker to the mix.

Of course, it remains to be seen how general manager Les Snead will go about landing more firepower since the Rams have the biggest deficit in the league at $33.1 million over the new salary cap. Even if they managed to restructure a few contracts, it likely will not be enough to add any big-name free agents.

The Rams could look to add one in the 2021 NFL Draft after receiving three additional compensatory picks. Their track record with picking in the third round indicates there is good reason to be optimistic.

Danny Garcia: “I Feel Like I’m Better Than Everybody At 154”