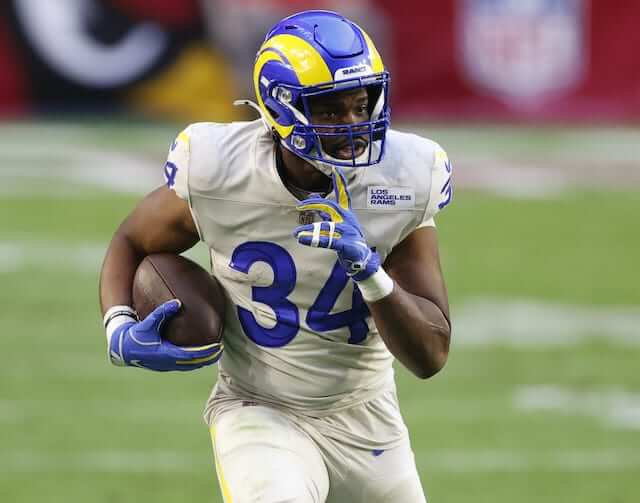 The Los Angeles Rams have high hopes for a potential resurgence on offense in the 2021 NFL season.

Despite their struggles last year, the Rams did manage to re-establish an emphasis on the run game thanks to their backfield committee. The trio of Cam Akers, Darrell Henderson and Malcolm Brown each displayed their ability to carry the load at different points in the season.

Of course, the emergence of Akers has given the team a good idea of how the backfield will look for the foreseeable future. As a result, they decided to make some changes to this group by letting Brown walk in free agency.

According to NFL Network Insider Ian Rapoport, Brown has since signed a deal with the Miami Dolphins:

Brown had long served as a stabilizing factor in the Rams’ backfield through the years thanks to his role as a quality, complementary option. While he may have been forced to split touches with Akers and Henderson, he established himself as their go-to option on the goal line by scoring five touchdowns on 4.1 yards per carry in 2020.

The Dolphins were not able to get much out of their run game during the 2020 campaign as they finished just 22nd in the league in rushing yards per game (105.5). Perhaps they could be hoping for Brown to serve as a complementary option to third-year back Myles Gaskin.

Meanwhile, some turnover was to be expected for the Rams given their salary cap situation heading into the offseason. Now that Akers has shown signs of becoming the type of back they hoped for, they feel comfortable enough to move forward with a 1-2 punch of him and Henderson.

It is safe to say that both backs could be poised for a big year now that quarterback Matthew Stafford has officially been traded to L.A.

Williams CEO admits they could lose Russell next season

Lookback at India's Selection and Batting Strategies for the 3rd T20I : Cricket

The F1 races of 2021 ranked by RaceFans readers