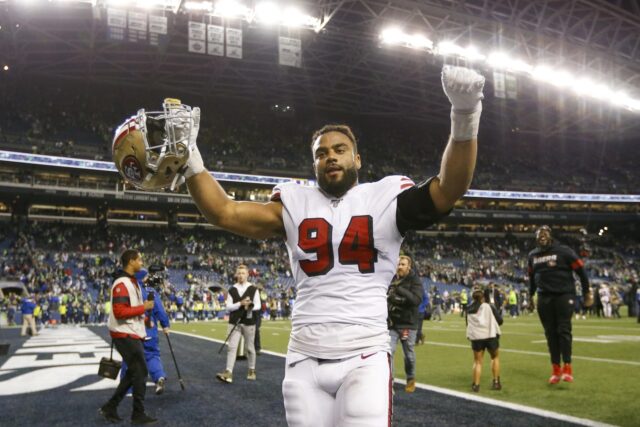 The Las Vegas Raiders have been much more active today as NFL free agency officially gets underway. The latest signing by Las Vegas addresses the defense, with Soloman Thomas agreeing to a deal with the storied franchise.

According to Tom Pelissero of NFL.com, the Raiders and Thomas have agreed to a one-year deal.

The #Raiders are signing DL Solomon Thomas to a one-year deal worth up to $5 million, per source. A new home for Thomas, the No. 3 overall pick in the 2017 draft who’s still only 25.

As Pelissero points out, Thomas was selected by the San Francisco 49ers with the third overall pick in the 2017 NFL Draft. Obviously, Thomas hasn’t lived up to expectations of being the third player taken in the draft and will be looking to redeem himself in Las Vegas.

Thomas went down with a torn ACL this past season while with the 49ers and played only two games for San Francisco in 2020 as a result. The Stanford University product has played a total of 48 games during his short NFL career this far, with 6.0 sacks and 73 solo tackles to his credit in a 49ers uniform.

Along with signing Thomas to a one-year deal, the Raiders also committed to wide receiver John Brown for next season. Las Vegas also agreed to bring back Richie Incognito, Nicholas Morrow and traded Rodney Hudson to the Arizona Cardinals.

With plenty of holes still left to fill on both sides of the football, the Raiders will almost certainly continue to make moves in the coming days to upgrade the roster.

The next move could be adding one of the talented wide receivers on the market like JuJu Smith-Schuster or Kenny Golladay, or they could continue with their efforts to become a force to be reckoned with defensively.

Thomas Tuchel reveals what 'frightened' him in Chelsea victory

After another nightmare, things need to change for the Knights

Marlins Have Had Discussions With Michael Conforto