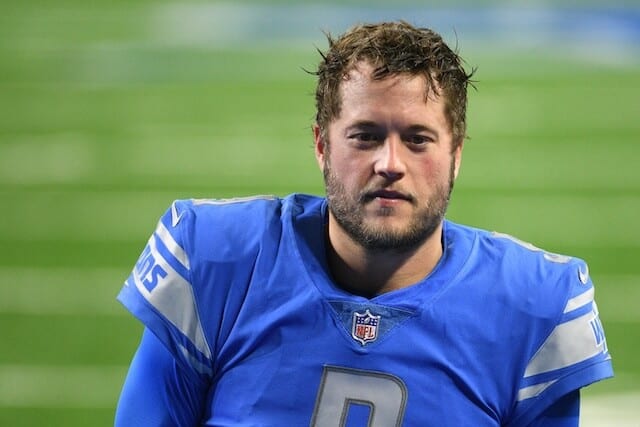 The Los Angeles Rams trade for Detroit Lions quarterback Matthew Stafford was officially pushed through with the start of the new league year beginning on Wednesday afternoon.

The Rams opted to switch things up under center after the offense became their Achilles heel during the 2020 campaign. As a result, they pulled the trigger on a blockbuster deal that saw them part ways with quarterback Jared Goff, two first-round picks (2022, 2023) and a third-round pick in 2021.

Head coach Sean McVay acknowledged the need for L.A. to produce explosive plays on a more consistent basis as opposed to settling for the safe yardage. There is no question that adding one of the league’s most talented arms in Stafford was certainly a step in the right direction.

McVay and general manager Les Snead also addressed the prospect of potentially shoring up some more firepower after the departure of Brandin Cooks left them without a true deep threat in the receiving corps last season. It will be interesting to see if they opt for another speedster like Cooks or a big-bodied wideout in the draft and free agency.

In a press release after the trade became official, McVay expressed excitement for Stafford to be in L.A.

“We are excited to welcome Matthew and his family to the Rams organization. He has consistently shown he is an elite thrower of the football and is a leader on and off of the field. We’re excited for what he brings to our team.”

Expectations are now higher than ever now that the Rams have once again shed some major draft capital in order to maintain their Super Bowl hopes. Fortunately, their status as a bona fide contender is a major reason Stafford chose them in the first place.

There is good reason to be optimistic about the pairing given McVay’s creativity on offense and Stafford’s track record as a statistical juggernaut. Of course, both have already enjoyed putting up great numbers during the regular season and are now looking to take that next step by making it translate into the postseason.

The veteran gunslinger managed to take the Lions to three playoffs during his 12 seasons at the helm. Even if the Rams experience some turnover, this will likely be the most talented supporting cast Stafford has ever been surrounded by.

How to make your lawn perfect like a golf superintendent

STRÖM LEADS BY THREE HEADING INTO THE WEEKEND IN KENYA

Steve Smith: Batting star will have to wait to re-take the Test captaincy