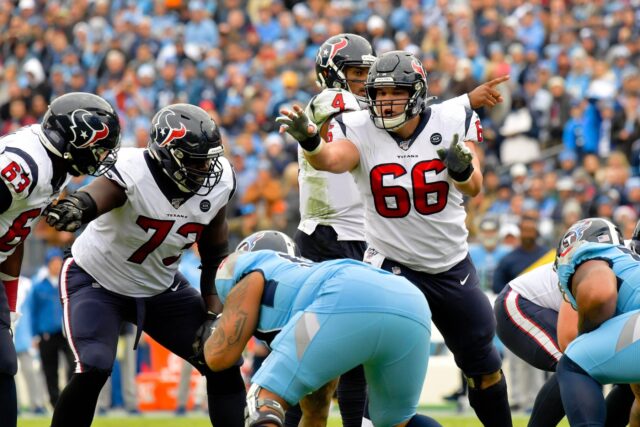 The Las Vegas Raiders have raised some eyebrows during free agency as they decided to reshuffle their offensive line.

The Raiders were originally expected to release Gabe Jackson and Rodney Hudson but managed to find trade partners in the Seattle Seahawks and Arizona Cardinals. They were also reportedly going to part ways with Richie Incognito but ultimately re-signed him to a new deal.

Trading Hudson, in particular, was a surprising move considering that he is widely regarded as one of the best — if not the best — center in the NFL because of his ability to pass and run block. Hudson was a staple along the line and one of the reasons Derek Carr stayed upright more often than not.

However, according to Ian Rapoport of NFL Network, Las Vegas did not wait long to find Hudson’s presumed replacement.

Former #Texans center Nick Martin is signing with the #Raiders, source said, as they work to rebuild their offensive line. After trading center Rodney Hudson, Las Vegas brings in a player who started 62 games in Houston.

Nick Martin spent the past four seasons with the Houston Texans and was one of the few bright spots for them as he was a reliable piece of their offensive line. While not the same caliber player that Hudson is, Martin does provide some veteran experience at center and will cost the Raiders much less.

While Martin could slot in immediately as the start, the Silver and Black are also high on Andre James, and he could outright win the job depending on how things shake out. James is naturally a tackle, but a move to the interior is plausible, and Martin could simply be a depth option.

After trading away Trent Brown, Las Vegas also has a hole at right tackle, so it will be interesting to see if that is filled either via the free-agent market or the 2021 NFL Draft.

Chisora-Parker Set To Battle In May

IPL 2022 [WATCH]: KKR skipper Shreyas Iyer argues with coach Brendon McCullum after getting out against RR

1 Cade Cunningham lineup we most want to see next season