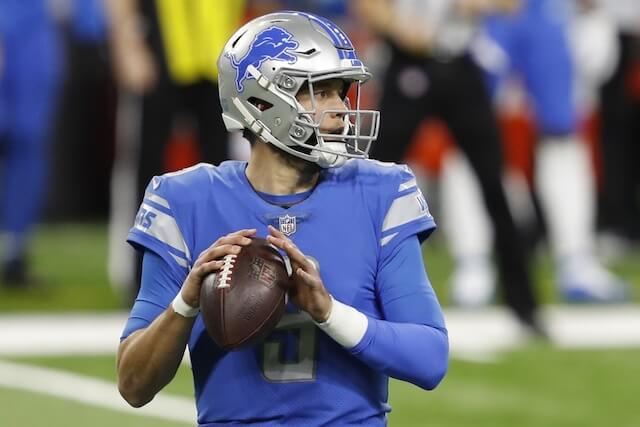 The Los Angeles Rams have been relatively quiet since the beginning of free agency. However, they made their big move months before, trading Jared Goff and multiple draft picks in exchange for Detroit Lions quarterback Matthew Stafford.

Stafford has statistically been one of the better quarterbacks in the NFL for quite some time now but has been stuck on the lowly Lions. Now, he’ll get a chance to produce on a team that absolutely should be in contention for the Super Bowl.

Stafford spoke about the deal to the Rams, saying he’s excited for this huge opportunity, according to Jourdan Rodrigue of The Athletic:

Matthew Stafford: “I’m just excited to be here. This is a huge opportunity and for my family.”

The veteran quarterback added he’s spoken to several Rams players, including his top offensive lineman and his star receivers:

Stafford has so far had conversations with Robert Woods, Cooper Kupp, Andrew Whitworth and a few other Rams.

The trade was not made official until the beginning of the league year earlier this week. However, Stafford has unofficially been a Ram for quite some time now, so he’s had plenty of chances to talk to his new teammates.

The Rams made the move for Stafford after several reports of rifts between Goff and Sean McVay. Now, for the first time since taking over the head coaching position, McVay will have a chance to coach a quarterback that he chose and not one chosen for him.

Stafford will have a real opportunity to win his first-ever playoff game. So far, he is 0-3 in the postseason despite throwing for over 300 yards per game in those losses.

One of the biggest issues with the Rams offense in 2020 was their inability to make big plays and take the top off of defenses. While it wasn’t entirely Goff’s fault, the acquisition of Stafford could help to alleviate some of those problems.

McVay spoke about this, saying that it comes down to more than just the quarterback position. Perhaps this is signaling that the Rams will look to add to their pass-catching core.

3 years ago Gerhard Erasmus wouldn’t have dreamt of playing Pakistan. An insightful read in general how associate cricket is way beyond what happens on the cricket pitch. : Cricket

Matthew Stafford Has ‘No Limitations’ With Throwing Elbow

5 All-Rounders to look out for