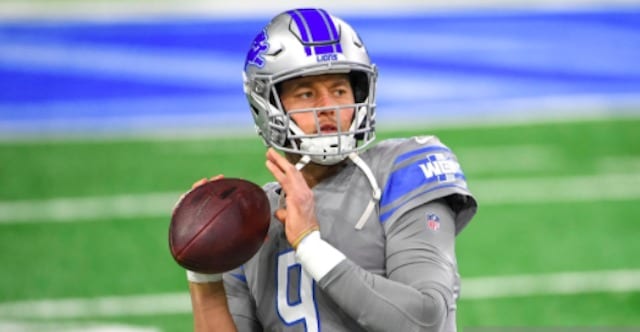 The Los Angeles Rams will go into the 2021 season with a new look on offense. For the first time since his hiring, head coach Sean McVay will have a quarterback that he selected in the form of Pro-Bowler Matthew Stafford.

Out of 12 seasons in the NFL, Stafford has thrown for over 250 yards per game in all but three. However, spending those seasons with a dysfunctional Detroit Lions organization, he was never able to produce a postseason win. He’ll get a legitimate opportunity to with the Rams.

McVay spoke about the process of acquiring Stafford, saying they had a plan to be aggressive in his pursuit, according to Lindsey Thiry of ESPN:

“To be able to acquire somebody like him was an opportunity that we wanted to be aggressive about pursuing it, and fortunately it worked out,” McVay said. “But by no means is it a reflection of not respecting and appreciating all the great things Jared Goff has done.”

What the Rams gave up to get him is proof of their aggression, parting ways with Jared Goff, two first-round picks and a third-round pick. McVay gave some insight into what exactly he sees in Stafford:

“He’s got great wide-field vision, sees the field, he’s able to speed it up if he has issues,” McVay said. “You’re watching a guy that if you watch the film, the game makes sense to him, and I really respect the lens that he sees it through … we’re excited whenever that chance presents itself to be able to get to work.”

Stafford should be able to infuse life into an offense that had immense struggles at the end of the 2020 season. Robert Woods and Cooper Kupp can capitalize by being able to take the top off of defenses, as Stafford presents a much greater deep ball threat than Goff.

As for McVay, he already seems excited to get to work on crafting a new offense built around of the better quarterbacks of the last decade.

As one of the 2021 offseason’s premier editions, Stafford comes to L.A. with high expectations. However, he’s ready for the chance to contend for a Super Bowl for the first time in his career.

If he can bring the gun-slinging mentality he had with the Lions, he can completely change the Rams offense.

An Ugly Win Over The Dolphins Is Still A Win