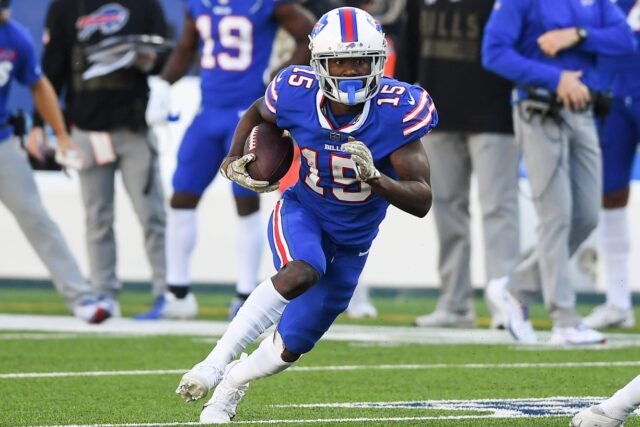 The Las Vegas Raiders made a splash by revamping their receiving corps with the signing of former Buffalo Bills wide receiver John Brown to a one-year $3.75 million deal.

The receiving corps suffered a major blow with the departure of Nelson Agholor in free agency. He enjoyed quite the resurgence in Las Vegas after finishing the 2020 campaign with 48 catches and eight touchdowns.

Agholor’s status as the No. 1 option in the passing game for quarterback Derek Carr leaves a notable void to fill. Fortunately, the Raiders are optimistic that Brown is the right man for the job.

Although Brown fielded his fair share of interest in free agency, it seems the prospect of playing alongside head coach Jon Gruden and Carr was too much to pass up, via Myles Simmons of Pro Football Talk:

“The biggest factor was, I had to think about my career,” Brown said. “I actually turned down more money to come here. I felt like it was the best decision for my career, so I had to put everything else aside and had to try to decide what would make me happy at the end of the day.”

Agholor signed a two-year, $26 million deal to join the New England Patriots in free agency. Brown has an opportunity to provide the Raiders with plenty of bang for their buck if he can maintain a similar level of production.

Head coach Jon Gruden has wasted no time acknowledging Brown’s skill set as a perfect fit for what he wants to do. This team’s affinity for speedsters on offense has been well-documented in recent years, and it is clear that they are hoping he can bring a similar dynamic.

Brown emerged as a go-to option for quarterback Josh Allen in the passing game during his days in Buffalo. Although he finished the 2020 campaign with just 33 receptions for 458 yards with three touchdowns in nine games, his status as a bonafide deep threat should help pay some dividends for this offense in the 2021 NFL season.

While there has been plenty of speculation regarding the team’s situation under center, general manager Mike Mayock’s endorsement of Carr indicates that he will be the shot-caller for the foreseeable future. Brown’s comments indicate that this played a part in him wanting to take less money with the Raiders this offseason.

If Las Vegas hopes to kick things up a notch on offense this season, Brown will need to establish himself as a true burner on the outside once again.

Significant Tottenham transfer is “signed” off as winger lands for medical

Got his work cut out

How the Phoenix Suns Became an Absolute Force