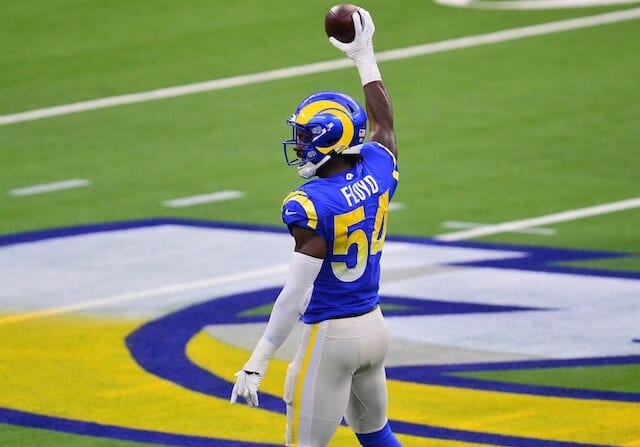 Los Angeles Rams general manager Les Snead came into the 2021 offseason in a difficult situation. With a majority of cap space going to their stars and dead cap hits, it was going to be difficult to retain the players that made the 2020 roster postseason-worthy.

One of the only free agents from last season that did get re-signed was outside linebacker Leonard Floyd. The cap-strapped Rams had to say goodbye to John Johnson III, Michael Brockers and others from the NFL’s best defense, but Snead made it a point to hang onto Floyd.

While they could have let him go and replaced him with a much cheaper option the way they did with Dante Fowler Jr., Snead felt that Floyd was different. He praised the new $64 million man as a special athlete, according to Myles Simmons of Pro Football Talk:

“It’s more than just an edge rusher. Leonard’s a special athlete, with instincts to play the run game, set edges, the athletic ability to run along that front seven,” General Manager Les Snead said Friday, via Stu Jackson of the team’s website. “You’ve got to be athletic, you’ve got to be able to have the instincts to run those plays and have that athletic ability to close and finish those plays, to be more than just a disruptor.”

Snead clearly thinks very highly of Floyd, as he should after career highs in sacks, tackles, fumble recoveries and almost every other statistic in 2020. Beyond that, Floyd is just 28 years old, so the remainder of his prime will be played with the Rams.

While retaining Johnson would have helped Jalen Ramsey in the secondary, having a top-tier linebacker and edge rusher lined up next to Aaron Donald is nearly impossible to stop. It will be up to Ramsey, Darious Williams, Taylor Rapp and some other young pieces to shut down receivers.

Two of the Rams biggest pieces from the secondary have decided to stay together, both signing deals with the Cleveland Browns. Troy Hill received a four-year deal while Johnson received three, as they will be tasked with overhauling one of the worst secondaries in the NFL among 2020 contenders.

Most likely to be traded from each team

Astros Among Teams With Interest In Luis Castillo

Formula 1 accused of ignoring abuse of human rights in Bahrain

WIN! The ultimate home putting studio from PuttOut worth £349