India skipper Virat Kohli has said that he would be happy to open the innings with vice-captain Rohit Sharma in the future as well. India dropped KL Rahul for the final T20I of the series against England. Kohli moved up the order to open the innings with Rohit. The move worked wonders as Kohli and Rohit added 94 for the first wicket. After Rohit was dismissed for 64 from 34, Kohli went on to remain unbeaten on 80 from 52 balls.

Speaking after the victory, Kohli revealed that he will open in the IPL as well. Hes said, “I am going to open in the IPL as well. Have batted in different positions in the past. But I feel we have a solid middle-order now. Will definitely like to partner Rohit at the top. Other guys feel a lot more confident when one of us is still in and is set. Augurs well for the team. Also how Shreyas batted in the last game and the responsibility he showed in the first game. Ishan was brilliant.” 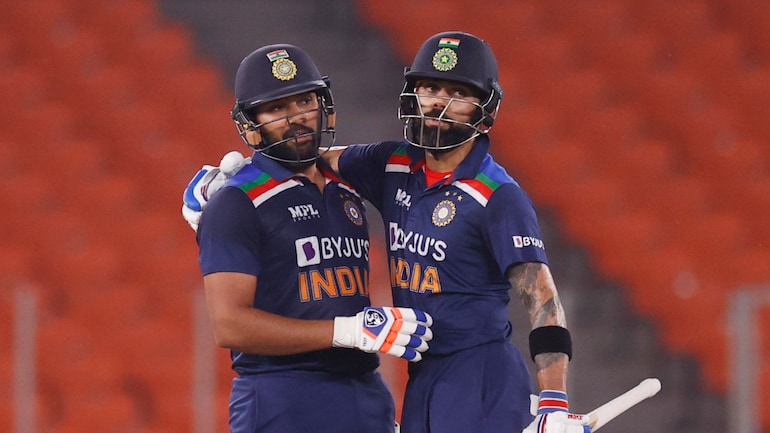 At a virtual press conference after the match, Rohit also opened up about Kohli’s batting position. He said, “It was good for us to win the game with that batting order. Everything will depend on what the captain is thinking at that particular point in time. I am sure we need to sit and analyse and collect our thoughts on what would be the right thing for the team. If that means he has to open with me, so be it, if we feel that is right as a team we will go ahead with that.”

He added that the team is not concerned with what is happening outside and the talks about who should play and who shouldn’t. On having Virat as his opening partner, Rohit said, “It is still a long time for the World Cup, early days to be talking about what the batting lineup will look like. Today it was a tactical move as we wanted an extra bowler to play. We wanted to leave one batsman out, unfortunately, it was KL Rahul and it was pretty tough. KL has been one of our key batters in the limited-overs format, especially in this format, but looking at the current form, the team management decided to go in with the best XI.”

The Indian vice-captain also asserted that the move does not send any signal that KL would not be considered, it was just for one particular game. “Things may change as we get closer to the World Cup. We do understand his ability and contribution at the top. I am not ruling out anything, nor I am going to say this is the preferred lineup because it is still early days, we have a good amount of time, we have IPL and then I am hearing we may some have more T20Is,” he explained.

'Ferrari structure had to change under cost cap'

Drive to Survive vs Survive to Drive | Netflix

Massa: Aston Martin has more to gain than Alonso

Tiafoe Stuns Nadal, Sets Up US Open Quarterfinal vs. Rublev

How To Bet On The Super Bowl in NE