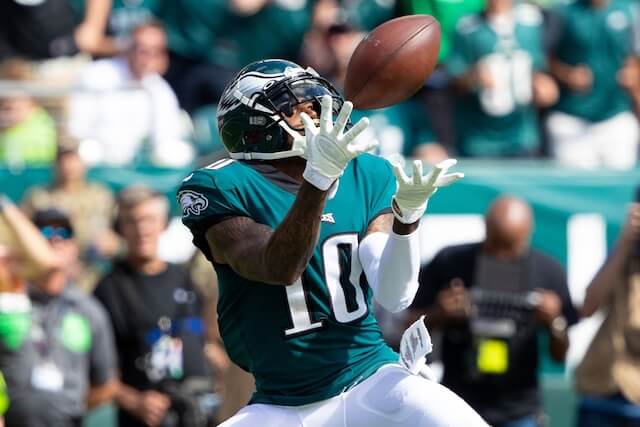 The Los Angeles Rams announced that they have agreed to terms on a contract with veteran wide receiver DeSean Jackson, formerly of the Philadelphia Eagles.

While the Rams did not announce the terms of the deal, it is a one-year contract that is presumably team-friendly considering Jackson is 34 years of age and coming off two straight injury-plagued seasons.

The Long Beach native is coming home though, and he already has some familiarity with Sean McVay dating back to their days together with the Washington Redskins.

All offseason, McVay has made it clear that the Rams are looking to add a deep threat in order to create explosive plays, something they significantly lacked last season after the departure of Brandin Cooks.

Considering L.A. did not have a lot of cap space at their disposal, Jackson made the most sense as he can certainly fill that need if healthy. The former three-time Pro Bowler has averaged 17.4 yards per reception throughout the course of his 13-year career.

In five games for the Eagles in 2020, Jackson hauled in 14 receptions for 236 yards and a touchdown, including an 81-yard reception.

With Matthew Stafford’s arm strength at the quarterback position, Jackson should serve as a nice complement to Robert Woods and Cooper Kupp, both of which are possession receivers. Van Jefferson is also an emerging young receiver for the Rams, although he isn’t much of a deep threat either.

It was reported after the Rams acquired Stafford that some veterans may be willing to sign cheaper contracts in order to pursue a ring in L.A. Jackson was the first to do so, and it will be interesting to see if anyone else follows suit.

Roman Reigns vs. Drew McIntyre advertised for night 1 of the WWE Draft on SmackDown

Who you call when s**t gets real