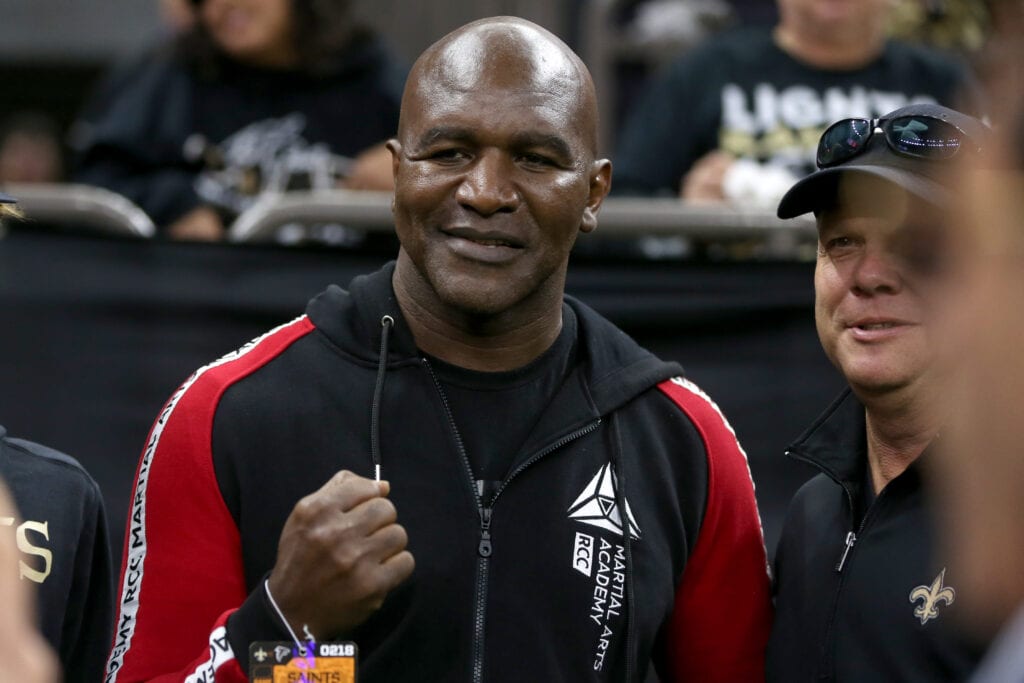 For those who had been wondering or maybe even holding their breath that were there might be a third exhibition style fight between Hall of Famers Mike Tyson and Evander Holyfield, you can now move on.

This after both parties have basically confirmed is that there won’t be a third “fight” for them, at least anytime soon.

First, Tyson took to Instagram on Saturday and put the Triller streaming app “on blast” that he was not associated with them or their business model. And further, that Triller wasn’t speaking for him for any future possible exhibition “Legend Fights”

This after Tyson, as part of his own “Legends League” had a bout against former Undisputed Light Heavyweight champion, Roy Jones last November. The two of them fought in a non-sanctioned, exhibition in California that had no actual judges and the fight was ruled, not shockingly, an eight round draw.

Triller reportedly garnered some 1 million pay-per-view buys and that spawned a whole new category of legendary fighters wanting to come back and fight a similar style of exhibition like what Tyson – Jones did.

And, that’s where Holyfield comes in, as he had previously stated that the reason he didn’t get the Tyson exhibition, and Jones did, was Holyfield’s seemingly outrageous salary demands of wanting $25 million guaranteed. However, this was after Tyson had reportedly been given $10 million to fight Jones & Jones somewhere in the neighborhood of $3 million for their exhibition.

The P.R. campaigns ramped up  the late Monday morning with press release from “Team Holyfield” announcing that there would be no exhibition, if there was ever going to be one in the first place, between their guy and Tyson. The release saying it was because Tyson has reneged on a $25 million guarantee for him to fight Holyfield.

“We thought this was a done deal but it quickly fell apart when Tyson’s people declined all offers,” said Kris Lawrence, Evander Holyfield’s manager. “We were negotiating in good faith all along and it appears we just ended up wasting our time.”

Still, that’s simply the Holyfield point of view and it’s obvious from previous chain of events that there was not going to be anywhere near a $25 million guarantee available for both fighters to make that kind of cash of their proposed pay-per-view with no fans/live gate etc.

By the way, that’s the same dynamic that has been holding up the third fight between WBC Heavyweight champion Tyson Fury and Deontay Wilder. And, it is now currently holding up the plans in England and the UK for Fury to potentially fight Unified champ Anthony Joshua instead. Without live crowds, it’s almost impossible to help make up the the tens of millions of dollars that each fighter wants in a guarantee.

Holyfield, 44-10-2, was last in the ring in May of 2011 and holds the only distinction of having gained the heavyweight championship four times in career that saw him defeat the likes of Mike Tyson, Riddick Bowe, and George Foreman.

The second Tyson fight was one of the most bizarre’ in boxing history, as it infamously ended with Tyson biting part of Holyfield’s right ear off for a third round DQ.

Tyson, the former Undisputed champ of the 1980s, finished with a career record of 50 – 6 retiring in the summer of 2005. Then, he re-emerged 15 years later with his “Legends League” idea of fights.

And, whatever the now 54 year old Tyson’s plans are, they apparently don’t include Holyfield.

Who are the highest-paid offensive tackles in the NFL in 2021?

Socceroos complete perfect second round with win over Jordan