Who are the TOP 5 greatest Scuderia Ferrari drivers in history?

The Scuderia Ferrari is the most iconic team in the history of Formula 1 racing and its place as the most important brand in the grid is unmatched.

Ferrari is the most successful and the most beloved team in the pinnacle of motorsport, and its history is filled with many drivers who were legendary, even if they could not deliver a World Drivers’ Championship to Ferrari due to some tragic circumstances.

The Scuderia is the only team to have entered each World Championship season since 1950 and its place is well respected in the Formula 1 umbrella.

Ferrari’s golden history has been written by several drivers and champions who have performed at tremendously high levels for the team during their campaigns at Maranello.

Without further ado, let us take a look at Ferrari’s five greatest drivers in Formula 1 history.

Even though his World Championship career in Formula 1 got cut short by a tragic accident on May 8th, 1982 that sadly took his life, Gilles Villeneuve remains an icon in motor racing, both for Formula 1 and the Scuderia Ferrari. 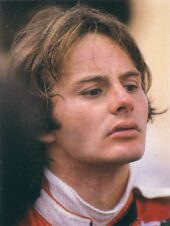 Villeneuve’s approach to racing, his passion, determination and skill behind the wheel earned him a place among the hearts of most F1 fans that saw him compete, and he was, and still is, a beloved figure for Ferrari’s Tifosi.

Gilles made his Ferrari debut in the 1977 Canadian Grand Prix at Mosport Park, in a race in which he drove a Ferrari 312T2 with a Flat-12 engine to 12th place. He went on to win six of his 66 races for Ferrari. Villeneuve sadly passed away after a crash with Jochen Mass during qualifying for the 1982 Belgian Grand Prix at Zolder. 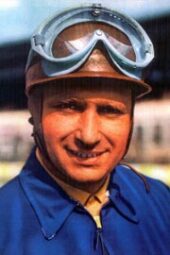 Even though Juan Manuel Fangio is arguably the greatest racing driver ever and won five Formula 1 World Championships, his stint with Ferrari was a short one. Still, winning a World Championship for Ferrari in the only season he competed for the Maranello-based team has earned him a spot in this list.

The Argentine legend arrived at Ferrari in 1956, already with three titles under his belt. Behind the wheel of a Lancia-Ferrari D50, Fangio went on to take the 1956 crown after winning three of the calendar’s seven races (not including the Indianapolis 500).

He became a four-time champion with Ferrari before leaving at the end of 1956 and winning his fourth consecutive title (and the fifth of his career) in 1957 with Maserati.

Fangio is surely in the debate of the greatest drivers to have ever driven for Ferrari if we look at his full career with five championships and 24 race victories (both record when he retired) in 51 starts. 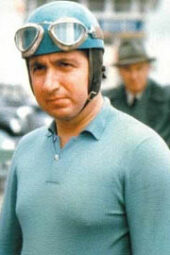 Not only was Alberto Ascari the first champion in the history of Ferrari, but he also remains the only Italian ever to win a Formula 1 title while driving for the iconic Maranello brand.

Ascari drove for Ferrari in the first season of the World Championship of Drivers in 1950 and achieved a couple of podiums. In 1951, Ascari won his first Grand Prix after taking first place in the 1951 German Grand Prix at the Nürburgring Nordschleife. Then, he won the 1951 Italian Grand Prix with the V12 Ferrari 375.

Ascari became Ferrari’s first World Champion in 1952 with six wins in seven starts (including his DNF in the 1952 Indianapolis 500) behind the wheel of the Ferrari 500. He won the 1953 championship in dominant fashion too, with five wins in eight races.

Tragically, the two-time champion lost his life at Monza on May 26th, 1955, when testing for Ferrari.

Ascari and Michael Schumacher are the only drivers in Ferrari history to win consecutive championships. 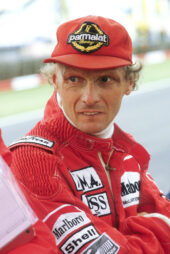 Niki Lauda will always be a legendary figure in Formula 1 racing, and the three-time champion took two of his motorsport crowns behind the wheels of Ferrari cars. Lauda competed for Ferrari between 1974 and 1977.

Niki Lauda left Ferrari after the 1977 season and was the all-time leader in wins for the brand at that time. In 58 races for Ferrari, he won 15, achieved 32 podiums and 23 Pole Positions.

Michael Schumacher is one of the most successful drivers in Formula 1 history and he certainly redefined statistics and the word dominance during his time with the Scuderia Ferrari, between 1996 and 2006. 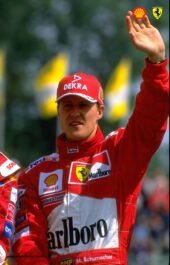 Michael Schumacher arrived at Maranello in 1996 with two World Championships under his belt. At the time, Ferrari had 16 years without winning the World Drivers’ title and he managed to put the team back at the top spot in 2000 when he took his third championship.

He went on to win five crowns consecutively, from 2000 to 2004 and took an almost unbreakable record of 72 wins for the Italian brand.

Schumacher is the most iconic driver in Ferrari’s history and certainly the greatest to ever drive a Ferrari machine.

Disclaimer:
The opinions expressed are those of the author’s and do not necessarily reflect the opinions or views of F1-Fansite.com, staff or partners.