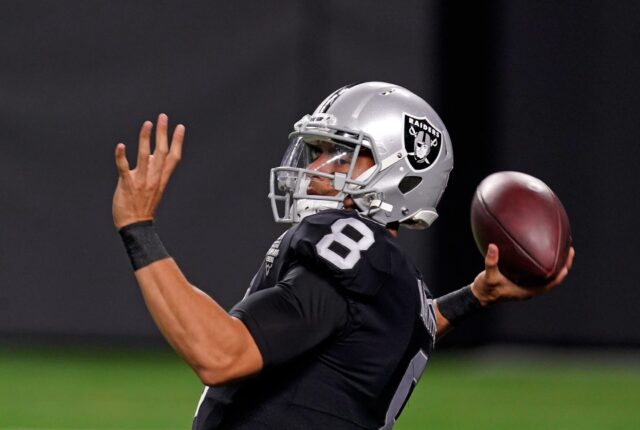 After a lot of speculation over the last few weeks, backup quarterback Marcus Mariota will seemingly be back with the Las Vegas Raiders for at least one more season.

According to Ian Rapoport of NFL.com, Mariota is expected to sign a reworked deal with the Raiders, which will clear a considerable amount of cap space for Las Vegas.

The original paycut offer $3M. Marcus Mariota negotiated up, giving him a chance for some real upside. And, should be noted, the contract is also tradable if the opportunity arises. But for now, a resolution. https://t.co/qOx06yDvg5

With this new deal for Mariota, the Raiders will have another $7 million in cap room to work with during this NFL offseason. This will give Las Vegas some flexibility moving forward in its attempt to improve the roster for the 2021 campaign.

As Rapoport pointed out, Mariota could still be traded. The Raiders trading Mariota was thought to be a foregone conclusion, but his contract wasn’t tradeable, leading to this reworked deal.

However, with so much movement around the league over the last few weeks, the Raiders might find it difficult to trade Mariota. The majority of starting jobs in the NFL have been filled, and few teams will be willing to bring in a veteran quarterback to be a backup at the amount he’ll be paid.

The one team that seemed to be very interested in trading for Mariota was the Washington Football Team. That’s no longer the case with Ron Rivera and company recently signing Ryan Fitzpatrick to be their starter for next season.

It’ll be interesting to see where the Raiders go from here, whether that be trading Mariota or running it back for 2021 and using the freed-up cap space to continue adding to the roster.

What Does Charlotte Do Without LaMelo Ball? | Basketball Insiders

Liverpool transfer to be announced in ‘next 48 hours’, three to move on

Djokovic, Nadal, Alcaraz all in top of Madrid Masters draw

Jaime Munguia: “I Want The Fight With [Jermall] Charlo”

Marc Gasol is out against Brooklyn

3 thoughts on the disposed Brooklyn Nets