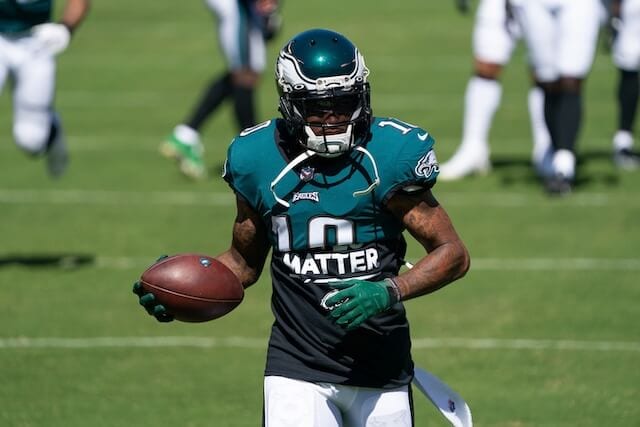 The Los Angeles Rams made a bit of a splash with the signing of former Philadelphia Eagles wide receiver Desean Jackson.

Head coach Sean McVay noted that he would be looking for more explosive plays on offense in the 2021 NFL season. The Rams have since managed to beef up their firepower under center with the acquisition of Matthew Stafford to kickstart the new league year.

The addition of Jackson gives the offense a bonafide speedster for Stafford to utilize in the passing game. It appears he is excited to get to work for a number of reasons.

Jackson already enjoyed a bit of a homecoming by returning to his first team in Philadelphia ahead of the 2019 campaign. Although he was happy to enjoy a second stint where his NFL career began, he admits that getting back to his L.A. has a personal element to it, via Luke Stansfield of 4th and JAWN:

Desean Jackson celebrating his new deal with the #Rams on IG live.

Jackson says he appreciates all of the #Eagles fans, but this is more personal as he’s returning to his hometown to end his career. pic.twitter.com/UvHENBo5BH

Jackson’s comments are certainly understandable considering not many players get to potentially end their football career where it all began in their hometown. It is safe to say that there will be an added sense of motivation to secure a Super Bowl ring before he officially hangs it up.

Fortunately, Jackson finds himself in an ideal position to make it come to fruition. Aside from the hometown connection and the fact that the Rams built to compete as soon as next season, his connection to McVay leaves gives good reason to be optimistic.

McVay served as Jackson’s offensive coordinator for the Washington Football Team from 2014 to 2016. He enjoyed two 1,000-yard seasons and 14 touchdowns during his three seasons under McVay’s tutelage.

Jackson has an opportunity to fill the void left by Brandin Cooks as the true deep threat in the receiving corps alongside Robert Woods and Cooper Kupp. Of course, the biggest question is whether or not he can remain healthy after struggling with injuries over the last two seasons.

An Invitation to Canadians: GOLF IS CALLING

Advantages Of UFABET – The Most Prominent Website For Online Betting