The England man struck on 90 minutes to give the hosts a priceless lead to take to Germany for the second leg. Kevin de Bruyne had given City a first-half lead on 19 minutes but Marco Reus levelled affairs late on.

Dortmund enjoyed the best of the early exchanges and Ederson was tested in just the eighth minute. Jude Bellingham combined well with Reus before forcing the City keeper into a decent save from distance.

Pep Guardiola’s men started to get a foothold in the game, with Riyad Mahrez looking bright. But it was De Bruyne who broke the deadlock.

Emre Can was dispossessed in midfield, with Foden then turning the Dortmund defence. His cross found Mahrez who expertly picked out the Belgian to slot home from six yards out.

City continued to probe but had just their second shot via Ilkay Gundogan on 27 minutes. However his effort was blocked but the hosts were then awarded a penalty just one minute later.

Can appeared to kick Rodri in the face as he stooped to head the ball but, on review, the referee reversed his decision. Dortmund had the ball in the net on 38 minutes but it was disallowed by the referee for a foul on Ederson.

VAR was not used and City were lucky as it seemed as though the keeper had fouled Bellingham.

The hosts were perhaps lucky to be leading at the break having kept Haaland quite. But the Scandinavian nearly made his mark three minutes after the interval.

He latched onto a through ball and shook off Ruben Dias. But Ederson pulled off a superb save with his legs to keep the Citizens ahead.

City struggled to get going in the early part of the second half and BVB looked the more likely to score. Guardiola decided to take action and brought on Gabriel Jesus for Bernardo Silva just before the hour mark. 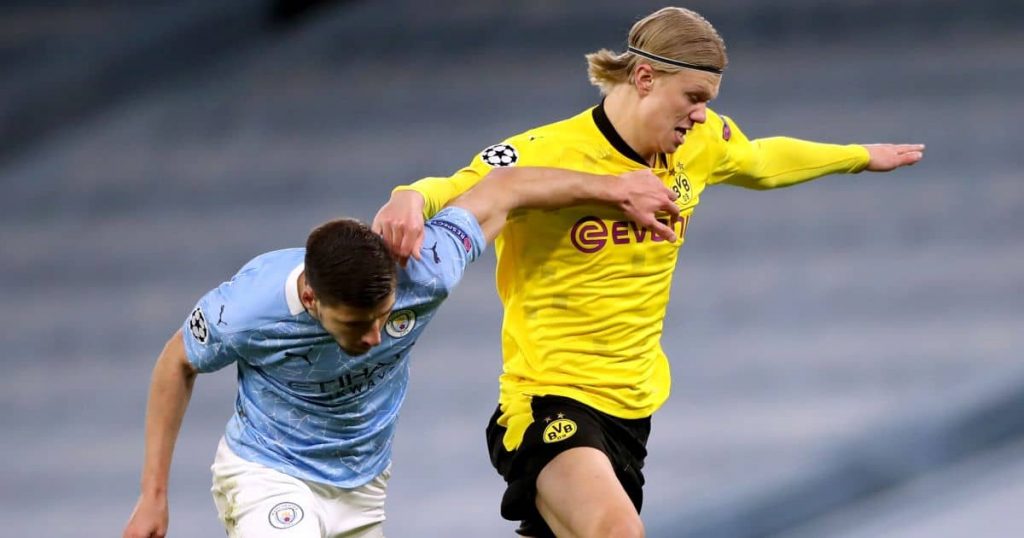 The superb De Bruyne started to influence proceedings more as the half wore on. On 64 minutes he drove past Mats Hummels and produced a superb cross that found Foden.

The youngster should have done better as he shot straight at the keeper from no more than seven yards out.

City seemed happy for the visitors to have the ball and wait for their chances to come. And on 76 minutes De Bruyne tried his luck from 25 yards, firing his effort just past the post.

As the match drew to a close, the Belgium ace generally had his way with the Dortmund defence. He picked out Foden in space but the England youngster’s 20-yard shot was straight at Marwin Hitz.

A clinic capped off with a goal! 🔥

But there was a late twist as Erling Haaland flicked the ball through the defence before Reus powered a strong finish into the bottom corner.

City had been living dangerously with only a one-goal advantage and were made to pay the price. But Foden ensured Guardiola’s men will take a narrow advantage to Germany when they lock horns again.

De Bruyne played a huge part in the winning goal and it was another masterclass from the City superstar.

What Is Marc Leishman Wearing?

“Bitcoin” – Giannis Antetokounmpo when asked what he does for a living