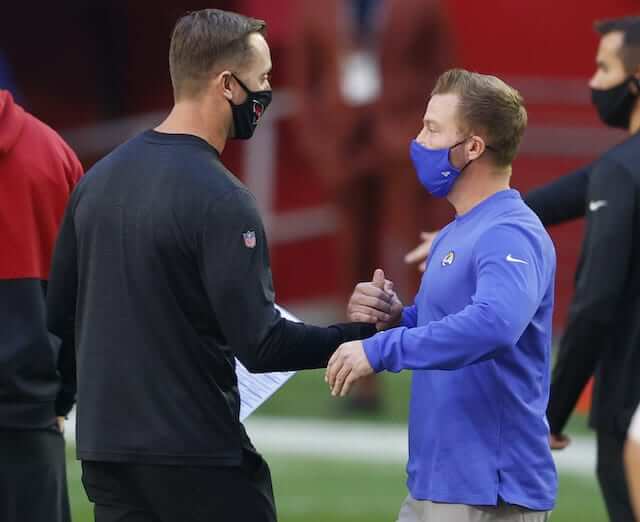 The Los Angeles Rams revealed the luxurious Malibu headquarters that will serve as the war room for head coach Sean McVay and general manager Les Snead in the 2021 NFL Draft.

The setup for this year’s festivities did not go unnoticed by Arizona Cardinals head coach Kliff Kingsbury. After all, the picture of him in his lavish war room last year made its fair share of rounds on social media.

Kingsbury was jokingly quick to point out McVay’s attempts to one-up him with a potential dip in the pool during this years draft, via the team’s official Twitter:

“Yeah I really think it’s just a ploy by McVay to allow himself the opportunity to take his shirt off again and jump in the pool like he did on Hard Knocks,” Kingsbury said. “Probably sip a little rosé, dip in the ocean and make some draft picks.”

The Rams social media was able to secure the team’s first win of the season over the Cardinals with their response to Kingsbury’s suspicions:

If you want an invite just say that 😉 https://t.co/b5OnGpvXtS pic.twitter.com/hZ0Aii1aZx

While Kingsbury’s comments were made in jest, there may be some truth to them considering the Rams have just six picks in this year’s draft. They will have some serious downtime on the first day of action since they are once again without a first-rounder.

McVay has had Arizona’s number since taking over in L.A. prior to the 2017 campaign with a flawless 8-0 record. Although Kingsbury has failed to end the losing streak since his arrival, there is no question his team has made some serious strides toward becoming a bonafide playoff contender.

Regardless, McVay’s Rams are still favored to win the division thanks to the acquisition of former Detroit Lions quarterback Matthew Stafford. Even though the Cardinals managed to make a few splashes of their own, it has not done much to change their odds in the eyes of major sports bettors.

It is evident that the banter between both sides was all in good fun. Of course, this will soon change with both teams looking to come out on top of the NFC West in the 2021 NFL season.

Watch: We had to show what this jersey means to us

New Video Out Now! This Time It’s All About Street Circuits That Never Came To Be, With Proposals From Formula 1, IndyCar, and More! Let Me Know What You All Think, Feedback is Greatly Appreciated! : motorsports

MLBTR Poll: Is Buck Showalter The Right Leader For These Mets?