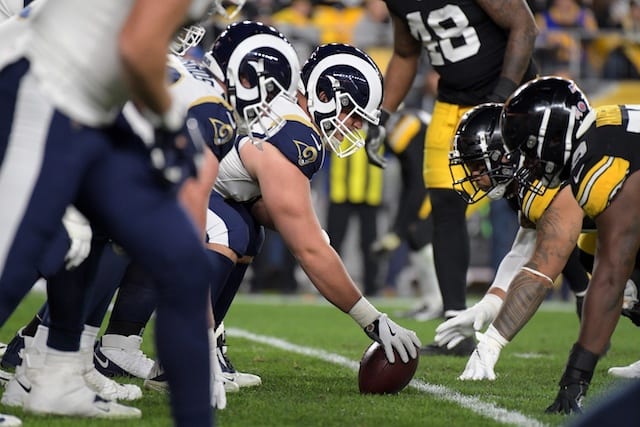 With the 2021 NFL Draft getting underway this week, one of the biggest needs for the Los Angeles Rams is interior offensive line, specifically the center position.

The Rams lost their starting center from a year ago, Austin Blythe, after he signed with the Kansas City Chiefs in free agency.

When asked if the Rams will look to draft a replacement early, head coach Sean McVay pointed to internal options like Brian Allen as a reason they may not have to do that.

“There’s absolutely candidates in our building right now,” McVay said. “(OL) Brian Allen is a guy that started at the center position. (OL) Coleman Shelton and then we’ve got starter caliber guards. Guys that have started at guard that absolutely have the position flex. So, one of the things that we’ve tried to do over the last couple of years is really have some position flex, especially with those interior players. But, definitely have more than enough guys in house and it’s that’s something that we feel really confident about.”

Allen originally was a fourth-round pick of the Rams in 2018 and actually started nine games at center in 2019 before going down with a season-ending knee injury which cost him most of the 2020 season as well.

Despite having Allen and some other quality options to play center though, McVay would not rule out drafting a center if one falls to the Rams.

“I think it’s not something that you feel like you have to fill because we’ve got a lot of guys in house that we feel like are more than capable of being starting-caliber NFL centers. And so, if it’s something, dependent upon how everything falls, it might be something that you address. But I think the one thing that’s been really good and Les and I’ve talked about this, and it’s a real credit to Les and his group, and really everybody in its entirety, is that we don’t have any major glaring holes where it’s like, ‘Okay, you’ve got to address this position or else,’ we’re not really asking anybody to feel like they have to come in and immediately start.

“You are trying to provide depth at some positions, there’s different things based on the personnel groupings, offensively or defensively that we want to try to fulfill, there’s some different things that (Special Teams Coordinator) Joe DeCamillis and (Assistant Special Teams Coach) Dwayne Stukes are looking for to help kind of fill out the way that we envision trying to be one of the upper-echelon special teams, units, and outfits in the league but that’s something that if it happens, it happens, but we feel more than comfortable if we don’t draft a center that we can fulfill that with the guys that we already have on the roster right now.”

In addition to center, the Rams have some other needs such as linebacker, secondary and perhaps a kick/punt returner. So given the internal options along the offensive line, it may make sense to fill those other needs early and then circle back to add a couple of offensive linemen late.

The Rams have proven to be very unpredictable in the draft though, so what they will ultimately do remains to be seen.

Imola F1 incident with Russell "done and dusted" after apology

Pelicans' Zion Williamson on controversial no-call vs. Nuggets: 'I've got to earn my respect'

The Open celebrated with spectacular light show in St Andrews