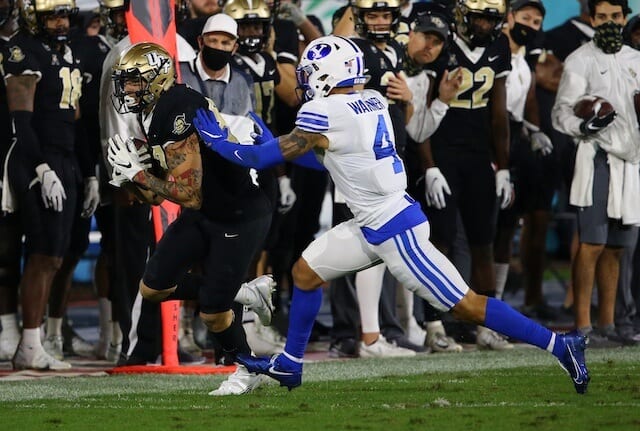 After drafting nine total players, including seven on Day 3, the Rams will have a ton of options to take a look at during the offseason and training camp to fill out the backend of their roster and practice squad.

When looking at what undrafted free agents the Rams decided to sign, they clearly prioritized their secondary, offensive line and pass catchers.

Signing three safeties doesn’t come as a huge surprise considering the Rams lost John Johnson III in free agency and their starters, Jordan Fuller and Taylor Rapp, are both young and inexperienced.

The most notable of that bunch is Warner, who is the younger brother of San Francisco 49ers star linebacker Fred Warner. In five seasons at BYU, Warner had 120 tackles, two interceptions and 16 pass breakups.

One interesting decision the Rams made during the draft was to not take any offensive lineman despite it being a perceived need. The Rams brass expressed optimism that the in-house options are good enough, but they did add some insurance on the undrafted free agent market with the additions of Jackson and Meredith.

Perhaps the most interesting note among the undrafted free agents was the addition of two more wide receivers after already drafting two, including Tutu Atwell with their first pick in the second round.

The Rams’ wide receiver room is already pretty crowded, but the team has been vocal about looking for a new return man, which could be the reason why they’re taking a look at so many new options.

Verdejo Ordered To Be Held Without Bail, Could Face Execution

Randy Orton Might Be Around WWE For A Very Long Time

Which players will be X-factors in the 2021 NCAA men’s tournament?

Timana Tahu: ‘There’s no such thing as a safer tackle. All we can do is try to lower the risk’ | Concussion in sport