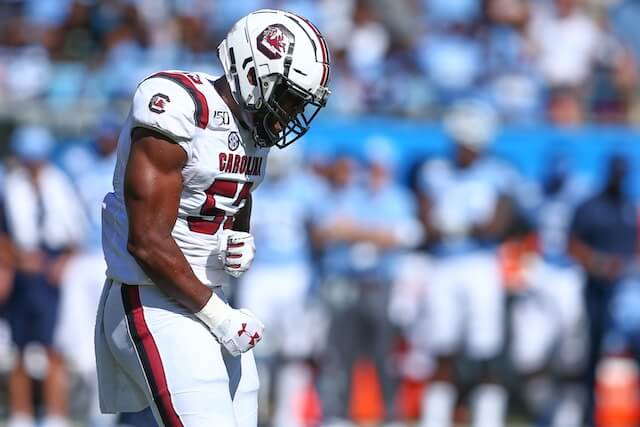 The Los Angeles Rams wrapped up the second day of action by taking South Carolina linebacker Ernest Jones with the 103rd pick in the third round of the 2021 NFL Draft.

Despite boasting the No. 1-ranked defense in the league last season, it was evident that the middle of the linebacker corps needed a boost this offseason. Jones is now slated to begin his career with one of the most talented groups in the NFL.

Regardless of where they were selected, getting drafted is a dream come true for players given the countless hours of hard work it took to get to that moment. Jones admits that the feeling was almost too good to be true at first.

“Disbelief. It was just months, years of hard work, just all came down on me at one time and I just couldn’t believe it for a second. I just looked at my phone while it rang a few beeps and once I heard that it was the L.A. Rams, man, just a bunch of emotions just let go.”

The Rams had used their first pick of the draft to take Louisville wide receiver Tutu Atwell in the second round. He noted that he was not surprised by the selection after the head’s up he received from receivers coach Eric Yarber.

It appears Jones had also expected a call from an L.A. area code after the due diligence they had done on him throughout the process.

“I did. Just having talks with them and when we would communicate, it was always very positive. They were always really high on me. So, just knowing that they stuck with their word and came and got me, it’s just great. It’s just great.”

Jones was a permanent team captain for the Gamecocks and the vocal leader on defense that relayed play calls on the field. He is now ready to take on any role that the Rams ask of him going into his rookie season.

Jones backed up his talk on the field by leading the team in tackles for the second consecutive year with 86 total. He credits his production to the belief that his position should be the first one to the ball at all times.

“I would just say relentless effort and just studying. Just knowing, just studying the game, and just watching your opponent and watching what they do. It’ll put you in the right spots a lot of times if you just watch film.”

Jones’ skill set paired with these leadership qualities favored him heavily when it came to the Rams’ scouting report. General manager Les Snead even mentioned that they had him as the No. 1-ranked player on their “potential leader board.”

Jones joins a group that is led by Micah Kiser, Kenny Young, and Troy Reeder. He could very well be poised for an immediate role on the inside.

Streetball Legend GETS HEATED vs Ballislife Squad!! They CALLED US OUT So We SHUT THE PARK DOWN!

Jared Dudley reveals when he will return to Lakers lineup