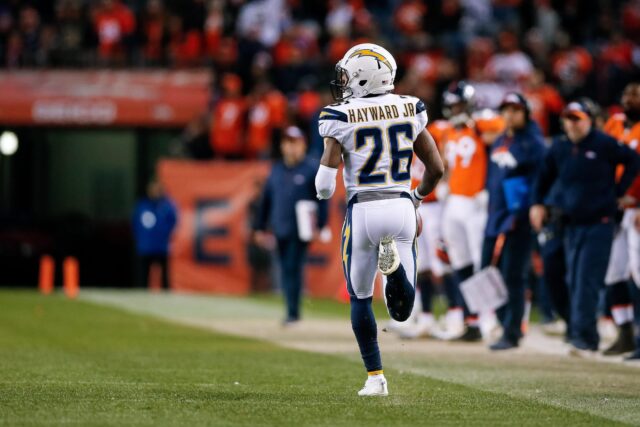 Las Vegas had been in the market for a veteran presence to help balance out the youth movement in the secondary since the offseason began. They showed interest in several established cornerbacks, such as Blidi Wreh-Wilson, A.J. Bouye, and even Richard Sherman.

Although they may have initially struck out in free agency, their misfortunate has seemingly paid off with the addition of Hayward. Not only are they getting some much-needed experience to alleviate the young talent at corner, his connection to defensive coordinator Gus Bradley could make for a seamless transition.

Hayward will be reuniting with Bradley after the pair spent four seasons together with the Chargers. He will now help lead a secondary group that is currently made up of a healthy mixture of early-to-mid round picks, including Trayvon Mullen (second-round, 2019), Damon Arnette (first-round, 2020), Amik Robertson (fourth-round, 2020) and Nate Hobbs (fifth-round, 2021), along with safeties Johnathan Abram (first-round, 2019), Trevon Moehrig (second-round, 2021) and Tyree Gillespie (fourth-round,2021).

The former two-time All-Pro finished the 2020 campaign with 41 tackles, one interception, and eight passes defended. He started in 13 of 14 games until a hamstring injury ended his season and effectively snapped a streak of 107 consecutive games played.

Mayock noted his desire to add playmakers to every level of this defense. While the 31-year-old has registered just three interceptions over the last three seasons, he did once lead the NFL in picks with seven back in 2016.

Hayward could very well emerge as a starter if Arnette continues to struggle to find his footing. At the very least, he will provide some quality depth as an integral part of the cornerback rotation.

The addition of Hayward indicates that the Raiders are now likely out of the running to land Sherman’s services this offseason. Regardless, they can take solace in the fact that they still managed to secure a potential key piece to their defense.

Springboks Six Nations inclusion ‘only a matter of time’

I Don't Play Fighting, I Can Change Your Life In The Worst Way

Backstage News On A WWE Winning Streak You Might Have Missed