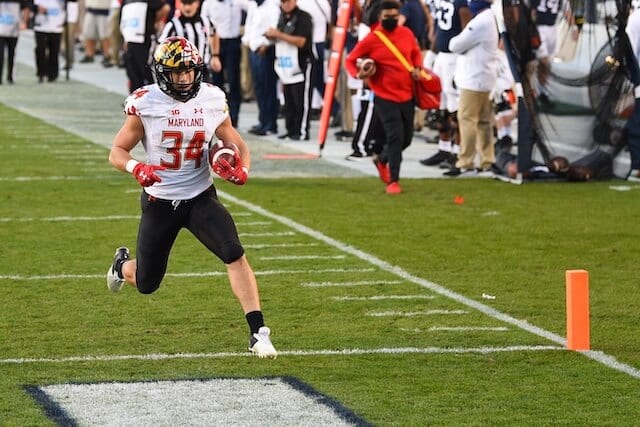 If we were going based on names alone, Maryland running back Jake Funk would have been one of the most intriguing prospects in the 2021 NFL Draft. Instead, it was the Los Angeles Rams that had the benefit of taking Funk at No. 233 overall in the seventh round.

The decision to bring in another running back after not using any of their picks on the offensive line came as a bit of a surprise. After all, they already have a bona fide workhorse in Cam Akers with the versatile Darrell Henderson slotted in behind him.

Regardless, it is clear that Funk had done enough throughout the draft process to convince general manager Les Snead and head coach Sean McVay to give him a shot. After all, the rookie’s versatility could be utilized in a number of ways on offense and special teams.

Funk revealed that he had been in contact with assistant head coach/running backs coach Thomas Brown leading up to the draft.

Funk added that he is looking forward to making an immediate impact on special teams and anywhere else the Rams see fit.

“You just have to be excited to make a play. Like, football is about making game-changing plays no matter when you’re on the field. If you can run down on a kickoff, pin somebody inside the 20 (yard line), create a big hit that gets the defense fired up and ready to go, it helps the team win. It’s all about the team. So for me, that’s just been my core, where it’s like I’m going to do whatever it takes to help our team win. And if that’s being a cover guy on special teams and going down there and getting a tackle or a big hit inside the 20, I’m going to do it. If that’s a contributing role on offense, I’m going to do that. Whether that’s first, second-down back, third-down back, doesn’t matter. Whatever opportunities you get on the field, you have to be able to take advantage and be that ballplayer that goes out and just makes a play when the team needs it.”

McVay and Snead noted that they did not feel as though they had any pressing needs on the roster that needed to be addressed. As a result, the Rams opted to bring players that boasted some upside as well as the ability to contribute right away on special teams.

Tight end/wide receiver Jacob Harris is another player with a unique skill set that is expected to take on an integral role in the third phase of the game. For now, Funk will need to do what he can to earn a spot on the final 53-man roster.

W Series to join Formula One at eight weekends in 2022

Madalene Sagstrom is leader at the Olympics

Keith Lee claims WWE did not like how he spoke