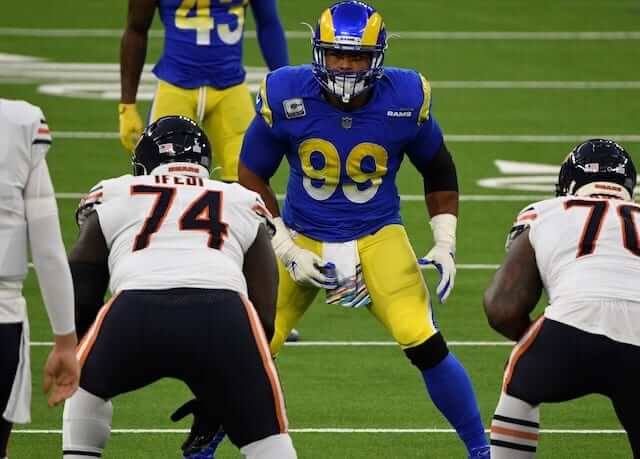 Although the NFL will be releasing its full schedule for the 2021 season on Wednesday evening, they decided to put out the Week 1 matchups early and it has been revealed that the Los Angeles Rams will be hosting the Chicago Bears on Sunday Night Football.

The decision by the NFL does not come as a huge surprise considering that will be the first-ever regular-season game with fans in attendance at SoFi Stadium.

Additionally, both the Rams and Bears made the playoffs a season ago but are coming into the 2021 season looking much different, particularly at the quarterback position.

The Rams, of course, made their blockbuster deal to acquire Matthew Stafford from the Detroit Lions. He gets a soft landing spot in his Rams debut, facing a familiar opponent from the NFC North in the Bears, albeit they do have a very strong defense.

Chicago’s decision to sign Andy Dalton and make him their starting quarterback was criticized by many at the time. All that criticism went away when they traded up to draft Justin Fields though, giving them their quarterback of the future.

Fields is set to start the season on the bench though, so Dalton will likely be the one getting the start in Week 1 against the Rams.

This game will mark the fourth straight year the Rams and Bears will square off in the regular season, with L.A. taking the last two.

The Rams are also 4-0 in Week 1 since Sean McVay took over as head coach, so this will provide as another opportunity to start off the season on a high note.