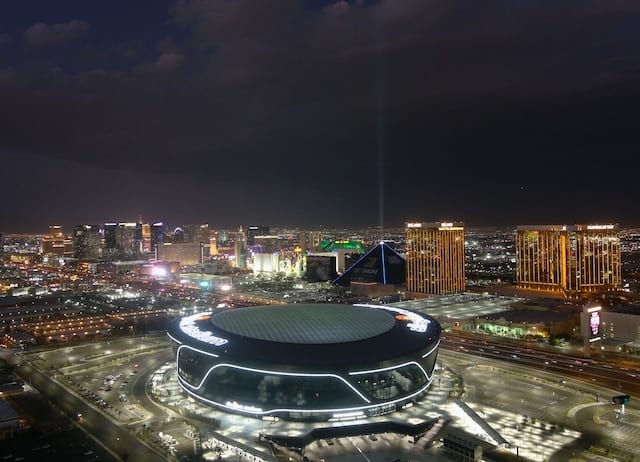 The Las Vegas Raiders put the finishing touches on their relocation last season by opening the doors of Allegiant Stadium. Unfortunately, the debut was spoiled by the lack of fan attendance due to the restrictions of the coronavirus (COVID-19) pandemic.

Despite their well-traveled history, the Raiders still boast one of the most passionate fan bases in the NFL. As a result, the delay has led to some serious build-up for Sin City’s newest team.

CEO and President of MGM Resorts International Bill Hornbuckle announced back in early April that Allegiant Stadium will be at full capacity for the 2021 NFL season. It seems fans will have to pay a pretty penny to get a seat in the house.

According to Vivid Seats, Las Vegas will host six of the 10 most in-demand games based on average ticket price:

It is evident that fans are anxious for a housewarming party at Allegiant Stadium, with the season-opening Monday Night Football showdown versus the Baltimore Ravens drawing a $944 average price. This was understandably second only to the homecoming of Tampa Bay Buccaneers quarterback Tom Brady in Foxborough against the New England Patriots.

While the debut versus Baltimore is the biggest ticket in Las Vegas, their AFC West matchup against the Kansas City Chiefs is not too far behind. There is no question that a visit from quarterback Patrick Mahomes and their heated division rivals will draw in a raucous crowd.

It is safe to say that the fear of missing out has set in with visits from the Philadelphia Eagles, Chicago Bears, Miami Dolphins, and Los Angeles Chargers also cracking the top-10 on this list.

Alex Leatherwood Promises Fans ‘You Will Not Be Disappointed’

If not for Cricket, I’d have been selling panipuri on the roads,” says KKR player

The Renaissance of Grigor Dimitrov