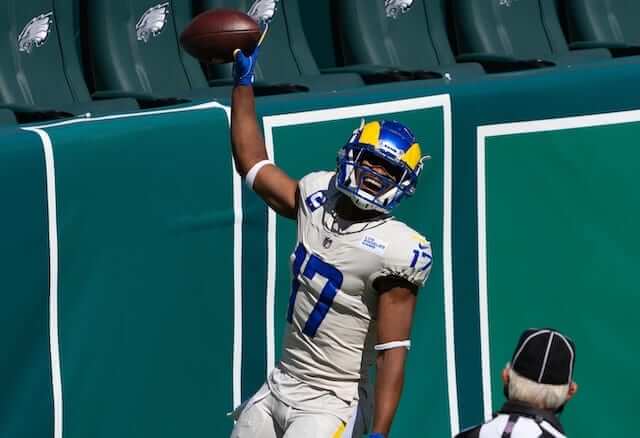 The Los Angeles Rams kickstarted the offseason by making a splash with their blockbuster trade for quarterback Matthew Stafford. They have since prioritized giving the veteran gunslinger as much firepower to work with as possible on offense.

The receiving corps is already headed by a dynamic 1-2 punch in Robert Woods and Cooper Kupp. They now boast a surplus of explosive options in Van Jefferson, Tutu Atwell and DeSean Jackson

The presence of tight end Tyler Higbee and the expected increased role for running back Cam Akers indicates that there will be plenty of mouths to feed for Stafford and head coach Sean McVay. Fortunately, this is a good problem to have leading up to the 2021 NFL season.

Despite all the new weapons that were added to the mix, Woods is hardly concerned with how it affects his role in the passing game, via Cameron DaSilva of USA Today:

“At this level, it’s a team sport. It takes all 11 guys. You want to have the best guys on your team. I’m confident in my ability, confident in my game to be out there and help produce for this team in any way the coach asks,” he told reporters Tuesday. “I see it as whatever weapons – running backs, receivers, quarterbacks – we’ve got a team goal. We’re trying to win a Super Bowl. We need a loaded team. I know we’re bringing in receivers, they do things differently, but they also help bring explosiveness to our offense and to our passing game.”

Woods feels the biggest adjustments will be made by opposing defenses trying to contain their newfound speed:

“I wouldn’t say that it affects me much, other than just bringing some speed on our offense,” he said. “I don’t think it affects me. I think it’s going to be affecting the defenses this year with these additions. We’re going to be coming at them with a lot of speed, a lot of weapons in our rotation. We’re just loaded at the receiver position. Throughout the game, you’ll be getting hit with a lot of different type of styles of receivers.”

Woods’ comments just go to show that the Rams have prioritized doing whatever it takes to win a Super Bowl at SoFi Stadium this season. Of course, there is no question that his status as a go-to option for Stafford will play an integral role in making it come to fruition.

It is safe to say that there is good reason for Woods’ confidence in his position within the offense. While the number of his targets may go down, the quality should help alleviate this thanks to a combination of Stafford along with the space created by deep threats such as Jackson and Atwell.

Woods’ versatility and ability to line up anywhere on the field should also provide some flexibility for McVay when it comes to mixing up the personnel.

Joanna Jedrzejczyk Reveals Gruesome Cut On Her Leg From Training