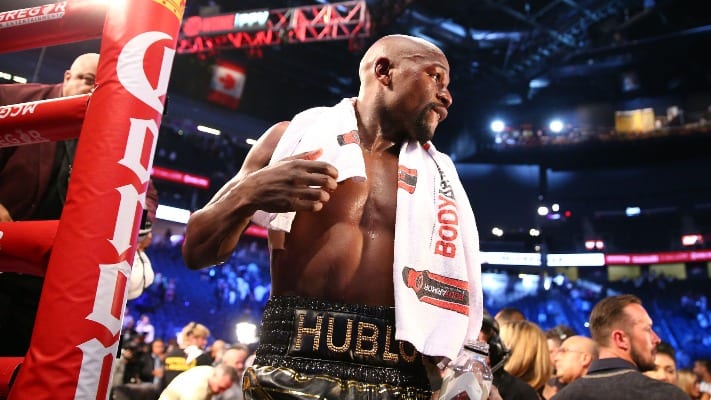 The Floyd Mayweather vs. Logan Paul boxing match was already considered unprecedented by many, but it just got even more unique after the rules for the fight were revealed on Wednesday.

ESPN’s Marc Raimondi was the first to report the ruleset for Mayweather vs. Paul; which won’t include judges, no official winner announced after the fight, and knockouts and stoppages would not be prohibited in the exhibition.

The Florida State Boxing Commission won’t sanction the fight due to the substantial height and weight differences between Mayweather and Paul. There is roughly a 40-pound difference in fight-night weight between Paul and Mayweather.

The boxing match will include eight three-minute rounds with 12-ounce gloves. If the fight does go all eight rounds, it’s theoretically possible that the organizers of the Showtime pay-per-view could in fact name a winner.

A boxing exhibition doesn’t count towards a fighter’s professional record, so either way, the fight goes, both fighters’ records will remain the same inside the ring.

Mayweather has recently predicted a quick knockout of the YouTuber turned Boxer Paul, while Paul predicts a “decapitation” of Mayweather in the ring. Mayweather hasn’t competed since his last boxing match against UFC star Conor McGregor, while Paul is 0-1 in professional boxing after his loss to British Youtuber KSI.

Paul has gone as far to say as to guarantee a victory over the Boxing Hall of Famer and will retire without granting Mayweather an immediate rematch. The tensions between the two have been building over recent weeks after the two promoted the event in Miami, where an all-out brawl occurred in front of the media between Paul, Mayweather, and their teams.

Paul’s brother, Jake, is slated to face former UFC welterweight champion Tyron Woodley later this year. Paul’s fight with Mayweather will be his first major test as a professional boxer.

The Paul vs. Mayweather card is set to place on Sunday at Hard Rock Stadium in Miami, Florida.

What are your thoughts on the rules for Mayweather vs. Paul and what is your prediction for the fight?

Jon Jones Failed Every Drug Test During Our Fight Week

Against All Odds on IMPACT Plus Results – IMPACT Wrestling