Tanner Boser takes on Ilir Latifi at UFC Fight Night on Saturday, June 5th. The heavyweight clash emanates from the UFC Apex in Las Vegas, Nevada, and broadcasts on ESPN+.

Below are several excerpts from my recent conversation with Tanner Boser. Multiple topics were covered with the elite Canadian heavyweight.

“I got offered that and it would have happened in June which we did say yes to. He ended up saying that he’s going back to 205. So then shortly afterward, we got offered Latifi. So yeah, now that’s the fight. It was just a matter of them telling me who I’m fighting. I’m not a guy who’s picky.”

The Andrei Arlovski fight. What are your thoughts on how that went down there?

“That I didn’t do enough. It was close. Yeah, could have went either way. But that’s my own fault for letting it be close. I mean, these things happen. Sometimes fights are close but I should have done more. Yeah, I’m still disappointed. But it is what it is. And now I just have to win this one.”

“The vibe is good at the gym. But it’s intermittent because we’re not always allowed at the gym. There’s, you know, the COVID restrictions changing all the time… It is what it is. We do the best we can all things considered with what we’re allowed to do all the time. But yeah, when we’re allowed there, me and Chris have fights coming up. Yeah, training’s good.”

“Yeah, so Jakob is a little boy, he’s from Edmonton. You can go to the Jakob little fighter page on Instagram or Facebook or Twitter. And there’s always a GoFundMe there. He’s born with a very rare… autoimmune disease. I’m not overly well-versed in it…But he’s got basically no immune system. He has to stay at home. The syndrome; the non-scientific name is like bubble boy syndrome or something. So he has to be in a bubble all the time.”

“He looked really good. That’s a great win. ONE FC, that’s a world championship. So that’s a big win and congrats to him. I think he looked great.”

Tanner Boser having his own UFC trading card

“That was really cool. Yeah, when I found out about that I was excited all day. Yeah, I collected trading cards growing up. So that was really cool for me. A lot of kids ask me and stuff if I’m in the video game and I mean I’m not. That would be cool, but it doesn’t really matter to me as much. A trading card to me is way cooler. That’s something that when I was a kid I really, really enjoyed. So yeah, being on one of the UFC cards is pretty cool.”

“You hit the nail on the head, he’s extremely strong. He’s a wrestler, a good wrestler. He does punch well. He punches I think better than people kind of give him credit for. If you make a mistake, he’ll knock you out. He can kick too. He’s got good low kicks. So it’s not an easy fight at all. A lot of people seem to think maybe it is because he’s on a bit of a skid.”

“But you look at the guys he lost to Derrick Lewis, Jan Blachowicz, Corey Anderson, Volkan (Oezdemir). These are the guys that are championship-caliber fighters. You know, him and Corey Anderson went to a decision, Volkan knocked him out. Him and Derrick Lewis went to a decision. And that was close. So yeah, it’s gonna be a very grueling fight, I believe. And I just got to be ready for it.”

The majestic Ilir Latifi photo of him riding a horse

“Somebody showed me the one of him on a horse. Yeah, it’s actually hilarious. Legendary picture, man. If I saw that picture and I didn’t know either guy, I’d absolutely be cheering for him.”

Music that Boser is jamming lately

“I have been listening to like a lot of Stan Rogers which isn’t new, old stuff. In terms of new music, The Mountain Goats put out a new-ish album, maybe a year or a couple this year. One was like a live recording thing and then the other one they put out about a year ago I guess. So I’ve been liking that. I’m listening to a lot of Jon Brooks, Colter Wall, nothing overly new. Well, Colter Wall had a new album come out last year. So yeah, I don’t know. I’m all over the map right now. I guess there’s not one particular new album I’m constantly listening to.”

“I guess just thanks to my sponsors PPS: Paul Peddle Services, Premier Built Garages, Axe Monkeys, and Meal Kraft. So thanks to all you guys and my coaches are Jeff Montemurro and Keijiro Noda.” 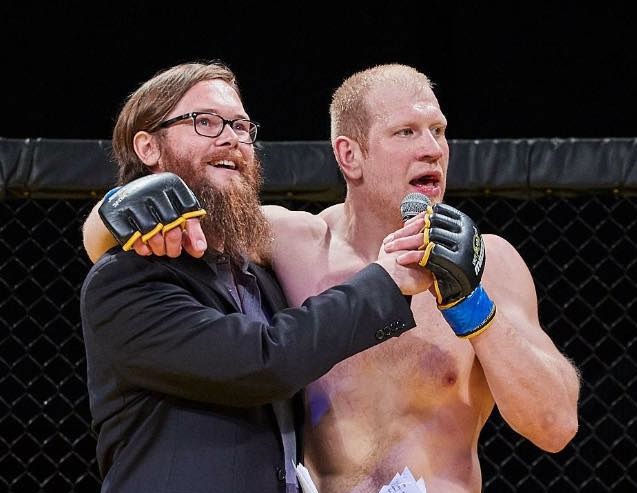 I’ve been enamored with combat sports for as long as I can remember. I’ve hosted MMA talk shows Lights Out and Pure Fight Radio with featured guests like Jens Pulver, Roy Nelson, Miesha Tate, Mark Coleman, and more. I’ve been an MMA broadcaster for XFFC as well as BTC and have done play by play commentary on live pay per view on GFL as well as FITE TV. I’ve provided written, audio, and video content covering some of the biggest MMA promotions like Rumble in the Cage, Unified MMA, and King of the Cage. I’ve worked as a sports entertainment personality for over five years and given play-by-play or featured promotions of KSW, ONE Championship, TKO, and Invicta FC. My work can be found in the USA Today Sports affiliate MMA Torch, Cageside Press, MMA Sucka, and Liberty Multimedia.