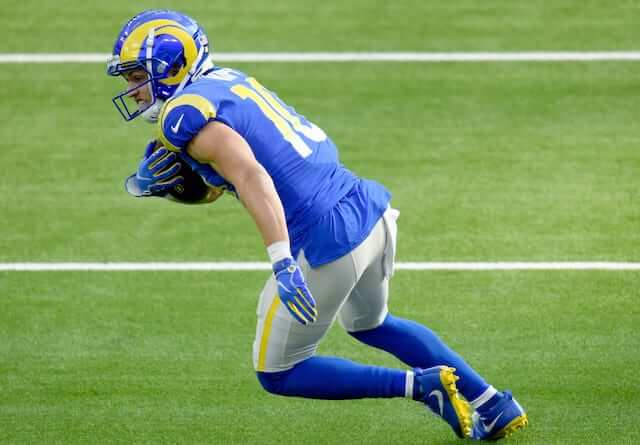 The Rams put an emphasis on revamping the receiving corps for Stafford through free agency and the 2021 NFL Draft. Regardless, Kupp’s viral catches at practice indicate that his status as a go-to option in the passing game remains intact.

It is encouraging to see that Kupp appears to already be in midseason form. After all, he spent the offseason recovering from a knee injury that held him out of the NFC Divisional Round loss to the Green Bay Packers.

Kupp has clearly made some tremendous strides in his recovery from a bursitis issue since then. According to Jourdan Rodrigue of The Athletic, it is something that will continue to be monitored during the 2021 NFL season even though he feels healthy now:

Rams WR Cooper Kupp says that his knee is healed (dealt with some pretty gnarly bursitis end of last season, fluid drainage via needles etc). Says he is feeling great now but it did take some time to get it well and back to normal. Has management plan in place for season.

This one-handed catch he made in practice is evidence enough that Kupp is indeed feeling healthy:

One hand snag.
Two feet in.

Kupp feeling back to normal is certainly a positive sign leading up to the start of training camp. However, it seems there are still plans to take every precaution they can in order to avoid any potential setbacks throughout the season.

Despite a down year from the offense, Kupp still put up big numbers with 92 receptions for 974 yards and three touchdowns. Unfortunately, his absence versus the Packers was sorely missed as this group failed to counter an offense led by MVP quarterback Aaron Rodgers.

It is no secret that Kupp now has a bit of a track record for missing big games due to injury. He was unable to take part in Super Bowl LIII after tearing his ACL earlier that season.

As a result, it seems the Rams are going to do what they can to keep Kupp healthy when it matters down the stretch and through the playoffs. This could include some potential load management during stretches of the new 17-game regular season.

Derrick Lewis can have next title shot vs. Ngannou

These Top 10 Android apps and games you shouldn’t miss this week!

Joshua Fabia on Sanchez split: ‘Diego has clearly been taking advantage of me for two years’