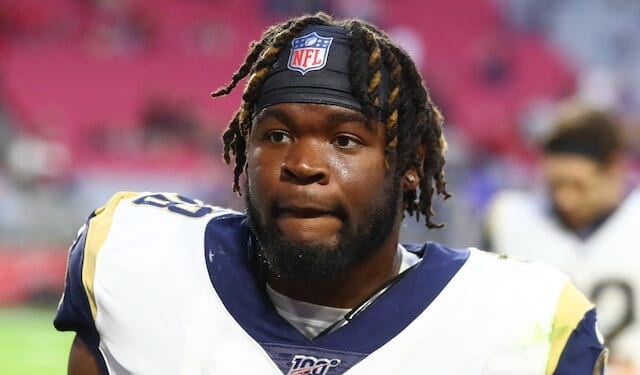 Unfortunately, a torn meniscus in training camp ultimately ended his 2020 campaign before it officially started. Kiser would also end up sidelined with injuries of his own and the lack of options at inside linebacker served as the Achilles heel of the No. 1-ranked defense in the league last season.

As a result, there was plenty of speculation regarding the state of the linebacker corps going into the offseason. Aside from linebacker Ernest Jones in the third round of the 2021 NFL Draft, this group largely went unattended.

Howard is now looking to pick up where he left off last year when he was competing for crucial snaps on defense. He said during an appearance on the “Rams Revealed” podcast that he is admittedly anxious to get back on the field, via Cameron DaSilva of USA Today:

“It feels like I ain’t been out there in so long, it’s been a whole year, but rehab is going real well,” Howard said. “I’ve been here the whole time. The training staff has been taking real good care of me and I’m back full strength and I’m ready to go.”

Howard added that he even was able to shed the knee brace for on-field workouts:

“Nah, I’m not wearing a brace,” he said. “I’ve got a sleeve on, but that’s as much as I’ve got right now. But I feel real confident, real comfortable and I’m ready to go.”

There is no question that this is an encouraging sign that Howard does not appear to be limited with his activity at the moment. If there was any silver lining to the injury, it is that he has had ample time to recover since it happened so before the 2020 campaign.

Despite missing all of last season, the Rams made efforts to keep Howard around by signing him as an exclusive rights free agent during the offseason. The move is indicative of the confidence they have that he can etch out an integral role for himself leading up to the 2021 NFL season.

While Kiser and Kenny Young could be poised for the starting jobs at inside linebacker thanks to their experience, nothing is set in stone at the moment. Howard will have an opportunity to throw his name in the mix once again along with Jones and Troy Reeder.

Conor McGregor’s return should be vs. this welterweight

FC Barcelona Pau Gasol on adjusting in EuroLeague and the series vs. Zenit

Sixers Clinch No. 1 Spot For First Time Since 2000-01 Iverson-Led Team