The time has come! Get ready for the action 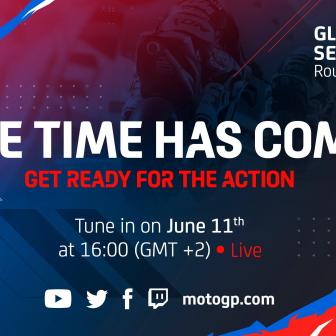 All that’s left to do now is race, and the time is upon us. Round 1 of the hotly-anticipated Global Series is now ready for lift off, and will be broadcast on the 11th of June at 16:00 (GMT +2). The first event will take place online, whereas the further three will be announced at a later date and take place later in the season – with the format depending on the situation regarding the Covid-19 pandemic.

Presenters Jack Appleyard and Jack Gorst will host the hour-long show, which will begin with highlights of qualifying before the 11 riders take on two races. The first one will be held on the Algarve International Circuit and the second one will be on the Autodromo Internazionale del Mugello. The riders will be playing on the new official MotoGP™21 Videogame from videogame developer, publisher and longstanding partner Milestone with race direction and the event powered by Lenovo Legion PCs. The points system for Round 1 will mirror the MotoGP™ World Championship, with 25 points for a win.

Fanatics and Formula 1 extend their partnership

Past success in Austria no guarantee of 2021 wins

Sprint qualifying events could double to six in 2022 F1 season

Sebastian Vettel: “Maybe we could have finished a bit higher up if things had been perfect”

10 players Arsenal missed out on - and who they signed instead

Predicting the first loss on 2021 schedule

Why the world’s most famous car race is in Monaco