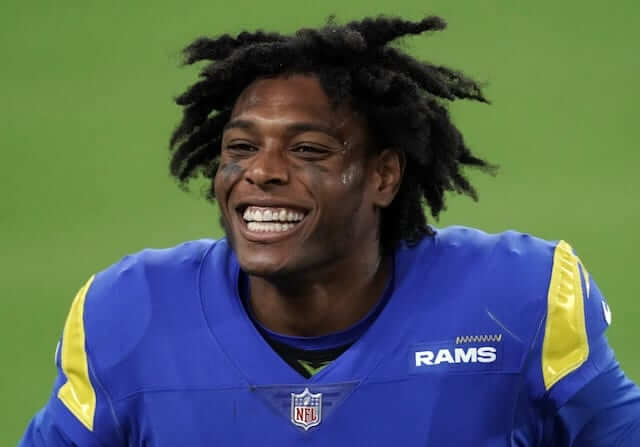 The NFL did the players a solid by loosening the restrictions on jersey numbers this offseason. The Los Angeles Rams have since wasted no time making a number of switches across the board.

Star cornerback Jalen Ramsey made it clear that he was vying for the No. 2 jersey after wearing No. 20 throughout his career.

However, it appears wide receiver Robert Woods’ seniority with the team and hometown connections helped him secure the coveted jersey. As a result, it remained to be seen which number Ramsey will be wearing in the 2021 NFL season.

He finally addressed the speculation by wearing No. 5 to the team’s first minicamp workout, via the team’s official Twitter:

The significance of a switch to No. 5 still remains unclear. Regardless, it appears he was able to get his hands on a single-digit number to his liking.

The only kicker that came for players switching jersey numbers was that they had to buy out their remaining NFL inventory. Fortunately, that will not be an issue for the four-time Pro Bowler after signing a lucrative five-year, $105 million extension last year.

Ramsey will be joined by the likes of wide receiver DeSean Jackson, cornerback Darious Williams and safety Jordan Fuller when it comes to switching jerseys. They will each go with the numbers they wore at their alma mater with Jackson going to No. 1, Williams rocking No. 11 and Fuller wearing No. 4.

It has been quite an eventful offseason for the Rams following the acquisition of quarterback Matthew Stafford. Although Ramsey was not shy about expressing his disappointment with the Tennessee Titans’ landing wide receiver Julio Jones, he made it clear that he is happy with where he is at.

Fans can now expect to see Ramsey new No. 5 jersey to grace the shelves of The Equipment Room at SoFi Stadium.

Full field for Division I Women’s Golf Championship in Arizona

Guardiola explains what made Man City win over Everton their ‘toughest’

Serge Ibaka admits there is still no timetable for his return