Hunter Renfrow Reflects On Influx Of Talent At Wide Receiver 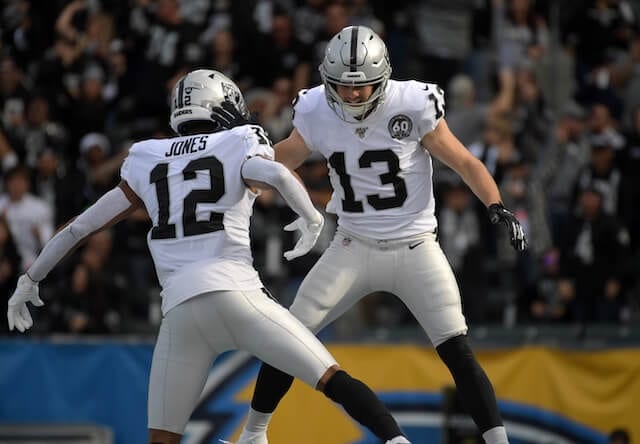 Aside from filling the notable voids on defense, the Las Vegas Raiders made concerted efforts to revamp their firepower on offense this NFL offseason.

The receiving corps suffered a major blow with the departure of last year’s No. 1 option in Nelson Agholor. Fortunately, they did manage to alleviate this loss by bringing in veteran hideouts like John Brown and Willie Snead IV in free agency.

Tight end Darren Waller remains as the clear-cut top option in the passing game for quarterback Derek Carr. Of course, the Raiders are also relying heavily on the emergence of their crop of young talent in Henry Ruggs, Bryan Edwards and Hunter Renfrow.

It is no secret that Ruggs struggled to fit the billing with his underwhelming performance as a rookie. Regardless, Renfrow is optimistic that the former No. 12 overall pick and Edwards are each poised for a big season in Year 2.

“I think Henry is a great player. I thought that last year,” Renfrow said. “Y’all didn’t get to see all the things that he did for everyone else, opening up the field for everyone else. What he’s doing, you can’t put a stat on. And what he did last year, you can’t put a stat on. And that’s kind of how we are trying to be as an offense. It doesn’t matter who has the yards, who has the catches, who has the touchdowns. We’re one unit and the best teams I’ve been on are exactly that. You hear outside noise and that sort of deal. Get to Week 8 and you don’t have that many yards, that many catches. But the good teams and great teams I’ve been on it doesn’t matter because you’re all going for the same goal. But Henry’s been good, and people ask me this offseason how Henry has been and things like that. Honestly, he’s a great player in practice. And it’s not one thing where he’s out there goofing around in practice and kind of not getting better, but he really is getting better every single day. And I see it every day, same with Bryan [Edwards]. So, I’m excited about watching them two this year and win a bunch of games.”

Renfrow added that the arrival of Brown and Snead gives the team a surplus of proven options to work with on offense.

“Yeah, absolutely, we’re excited to have both of them. Willie and John are two great guys first off. I’ve been lucky since I’ve been here, for the most part had a really good receiver room, especially when the year rolled around. But Willie and John have been two veteran guys with the departure of Nelly [Nelson Agholor]. Obviously, they’ve brought in some veteran presence, they’ve been on successful teams, they’ve been really good players for a long time. I know John is going into year whatever for him, he’s 31. But, yeah, it’s going to be fun. It’s going to be fun competing. Like I said earlier, the great teams I’ve been on it doesn’t matter, it’s very selfless. But it’s also a very competitive practice and I think if anything else it’s going to push everybody else to be better and better because we look over there and you got to go out and compete. He does a really good route, so you want to go out there and do an even better route, and so I think it’s great to have them. And like I said, two great guys.”

There is no question that having too many weapons on offense is certainly a good problem to have leading up to the 2021 NFL season. This is partly why Waller believes this group is ready to take that next step this time around.

The Raiders clearly have high hopes for Ruggs and what his skill set could do for Carr and the rest of the offense. He has not shied away from these expectations and is looking forward to taking on a bigger role.

While all eyes will surely be on Ruggs and Waller, it will be interesting to see how the pecking order shakes out for Renfrow and the rest of the receiving corps.

Updates on players from CSK, RCB, Mumbai Indians & others

Jonathon Cooper had the most wholesome draft celebration (Video)

Monaco GP livery “even better than our usual design”

Conners tied for 14th going into weekend at PLAYERS