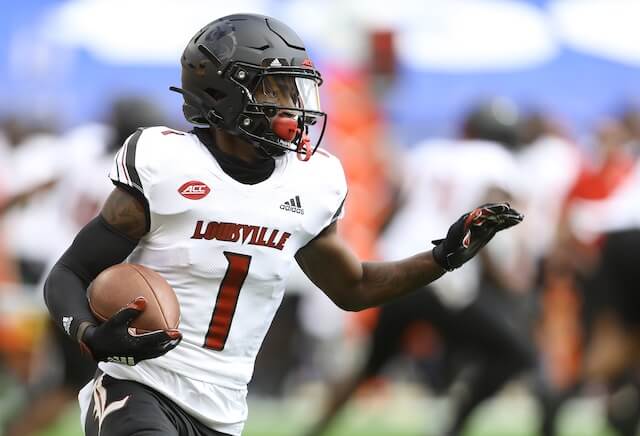 The NFL Players Association announced their Rookie Premiere Class of 2021, a list compiling rookies who are deemed to be the game’s most marketable rookie stars.

The event is traditionally held in Los Angeles, but this year the NFLPA hosted a private, virtual player-only program. Several industry experts from Panini America, Sleep Number, and P&G gave presentations, as well as current and former NFL stars like Emmitt Smith and Dak Prescott.

There are several factors that go into the selection process, such as the player’s position, college performance, draft status, and projected overall demand and marketability. Rookies like Trevor Lawrence, Kyle Pitts, and Ja’Marr Chase were no-brainers given their talent and draft pedigree.

It was also no surprise that two Los Angeles Rams rookies made the cut. Tutu Atwell and Jacob Harris made the NFLPA’s list as wide receivers, a testament to their potential and the Los Angeles market.

Atwell’s inclusion makes complete sense as the Rams drafted him No. 57 overall in an effort to add more speed to what used to be an explosive offense. Atwell figures to be a part of head coach Sean McVay’s scheme for the 2021 season, especially because Los Angeles has a quarterback in Matthew Stafford who can really throw the ball downfield.

However, Harris’ making the list is a bit of a surprise as he was taken No. 141 overall and is considered to be a project at the next level. However, Harris does possess elite athletic traits to go along with his size and speed which could bode well for his NFL future if he is able to put it all together.

Save the date: first Rising Stars Regional Final is here