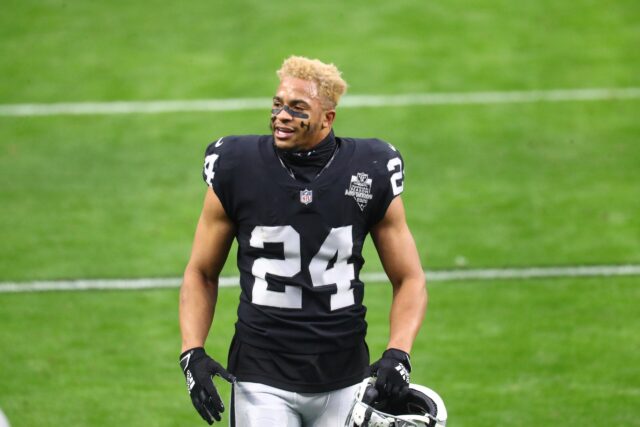 All eyes will be on the Las Vegas Raiders secondary heading into the 2021 NFL season, as that may very well be the unit that makes or breaks their postseason hopes.

The Raiders hired Gus Bradley to turn around what has been one of the league’s worst defensive units, and the front office did its best to bolster that side of the field via the 2021 NFL Draft and free agency. Hiring Bradley had its perks as players like Casey Hayward signed with Las Vegas due to their familiarity with the coach.

Hayward should be a boost to the secondary but had high praise for Johnathan Abram, who is in line to have a bounce-back season.

“I think he’s a good player, has the potential to be a really great player, especially in this defense,” Hayward said. “I’ve seen some really good safeties in this defense that made a lot of plays, some All-Pro plays. I feel like he can do the same thing.

“I feel like he has the potential to be really great in this defense. Going into his third year, I think he’s going to peak. I see the leadership role he’s taken on and that’s what we need. We need some leaders in this secondary and on this defense and the team as well. Like I said, it’s my first year, so I see a lot of good similarities to some good defensive players that I’ve seen in the past. I think he’s doing a great job so far.”

Abram has not yet lived up to his potential as he has struggled with injuries but is reportedly healthy and ready to assume more responsibility. The safety is a sure tackler who plays with fire and passion, and that should go a long way for a Silver and Black squad who can feed off that.

Hayward and Abram make a solid back line for the defense, and it will be exciting to see what the two can do together.

Sugar Ray Leonard On Spence Eye Injury- “Have To Be Patient”